Antony and the Johnsons - Hope There's Someone 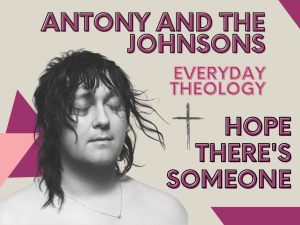 The song: Antony And The Johnsons- Hope There's Someone (Live in Stockholm 2006) - YouTube

The song’s lyrics: Antony and the Johnsons – Hope There's Someone Lyrics | Genius Lyrics

In 2005, Antony and the Johnsons released their award winning album I am a Bird Now, which explores the lead singer’s thoughts regarding their humanity and transgender identity. The album cover features a famous photograph of Warhol superstar Candy Darling, taken by Peter Hujar, on her deathbed. An actress, transgender icon and artistic muse, Darling died of lymphoma in 1974, age 29. While clear themes of mortality interlace the songs, it is Anohni’s hauntingly beautiful vocals that encase the album in an ambience that is both sinister and soothing.

The first track on the album is Hope There’s Someone, which appears to be sung either from the point of view of someone who is dying, or someone who fears dying alone:

Hope there’s someone who’ll take care of me

Nice to hold when I’m tired

What is clear about this song is that death is paralleled to sleeping, which is not a comparison unfamiliar to the Bible. For example, Jesus describes Lazarus as having “fallen asleep” after his death (John 11:11 NRSV). “Many of those who sleep in the dust of the earth shall awake, some to everlasting life” (Daniel 12:2) because to “sleep the sleep of death” is but a temporary stop on the path to salvation (Psalm 13:3). Additionally, before Jesus’ capture and subsequent execution, the disciples fell asleep in the Garden of Gethsemane, arguably foreshadowing the imminence of the Messiah’s foretold death (Matthew 26:40). The New Testament studies the ambiguities of the afterlife in great depth, its writers clearly enthralled in the questions of eternity. For many people, this unknowingness makes dying a continuously frightening prospect: “will I go” to Heaven?.. “will I go” anywhere at all?

Significantly, something generally understood as connecting humans is our desire for companionship. This does not necessarily come in the form of a romantic partner but the loved ones we entrust with our lives: with our joy, worries, dreams and fears, with the imperfect and weird parts of ourselves. These loved ones will remember us when we die, and it’ll be them who we die remembering. As much as we hope that someone will be there to comfort us upon death, we pray equally (if not more) that those we love will be gifted the same relief. When such fears arise, faith in God’s love must be stronger than merely belief in Him. If I should die before I wake, I pray the Lord my soul to take and the souls of those I might love more than Him: “will I go” to Heaven?.. will they be there too?

At this point in the song, it is unclear whether the narrator is hoping that someone will be there to comfort them through the process of dying, or after it:

Between light and nowhere

I don’t want to be the one

Within Catholic doctrine there is a purifying process known as Purgatory, which occurs after death. Those who are not ready for Heaven, or did not seek forgiveness from God during their life, go to Purgatory to work off their sins. While scripture lacks definitive reference to a purgatorial state, it does regularly refer to the cosmic journey that takes place when, upon dying, we are “passed from death to life” (John 5:24). The idea of getting lost in the forgotten tomb between an earthly and eternal life is extremely scary, even if it is seemingly irrational. As David asks God, “will you forget me forever?” (Psalm 13:1). Will you bear my worry as my body begins to fail? Then, once my soul has been collected, “will I go” to Heaven or will I get lost on the way?

As Amos very simply explains, “do two walk together unless they have made an appointment?” (3:3). While the writers of the Bible are themselves unclear about what happens after we die, what is generally understood throughout both the Old and New Testaments is that we will die only ‘when it’s our time’. In whatever form they may come to us our encounter with Death will be appointed and prepared for (John 14:2). We will not be lost to the middle place. God reassures that in the afterlife our safety is His priority because “where I am, there you may be also.” (John 14:3). “With Me in paradise” all the worries and the loneliness you experienced on earth will trickle through the clouds on which Heaven stands (Luke 23:43). They will fall as rainwater to re-join the earth and bring life and health to those still living. Though all will eventually pass from death to life, we can find solace in the certainty that no one will be forgotten by God:

There’s a man on the horizon

Wish that I go to bed

If I fall to his feet tonight

Will I rest my head?

According to research by David Kessler it is extremely common for people to see visions of passed loved ones, especially parents – in particular, mothers – before they die themselves (1). A family friend of ours said that her father spoke to his Mum before he died after a long battle with cancer and my Mum, who’s a nurse, has told and heard stories about very similar things happening of the wards days or hours before a person passes away. This is also a common recount associated with near-death experiences. Whether these loved ones are actually there or, rather, a vision created by the brain to comfort someone with love and familiarity, the horizon on which these people tread bridges the space between this life and the next. The first version of this verse sings “there’s a ghost on the horizon”, perhaps a loved one of the narrator. The second version of this verse, which I’ve shared with you here, appears to be connecting with someone more specific: either a male relative, friend or (based on Their most used pronouns) God. Regardless, this dying narrator is seeking comfort from the dead because “they are transitioning” says Dr. Martha Twaddle (1); even though their physical body is still alive, “they are in a phase we don’t understand physically or metaphysically” (1) in which the mind is moving forward to a place beyond the sight of the living.

Perhaps the ‘ghost’ of the horizon is a loved one. Perhaps the ‘man’ on the horizon is God. Anohni goes on to sing about falling prostate at the feet of this man at the end of their bed, where she hopes she will then rest her head. One of the most famous and, to the unfamiliar, usual stories in the Bible is when Mary of Bethany washes the feet of Jesus with her hair (Mark 14:3-9). This was a relatively common gesture of hospitality during the Herodian period, which Mary heightens with her use of the “costly ointment of nard” (Mark 14:3). The image of a person kneeling at the feet as God, even in His human form, is a traditional symbol of worship; it represents the love a person has for God as well as the respite they receive in His presence. There is a place to feel safe.

Thereby, in Heaven, our souls will never find themselves lonely or scared. However, in life, we do not always feel worthy of the company of God:

So, here’s hoping I will not drown

Or paralyze in light

And godsend I don’t want to go

To the seal’s watershed

The ambiguity of the afterlife does not necessarily regard what it looks like but, rather, what part we will be allowed to see. A fear which people are often reluctant to discuss is the fear that they will not be deemed worthy of salvation. Christianity is rooted in the idea that God exemplifies justice and forgiveness (Hebrews 6:10), meaning it is easy to feel that by questioning your own goodness you are somehow undercutting God’s Love for humanity. Nevertheless, fear of inadequacy is very real… when faced with the uncertainties of life everlasting, the fear of judgement is elevated even if your love for God is steadfast. Sometimes it is easier to listen to the demons from our past than search for angels in our future.

Though they have never mandated the language of the media, Anohni has stated previously that “in my personal life I prefer ‘she’… to call a person by their chosen gender is to honour their spirit, their life and contribution” (2). However, the continuation of judgement from some Christians who call for the damnation and conversion of LGBTQ+ people can understandably play on people’s sense of worth. Though they may speak loudly, however, those who shout hatred are not wise. Bigots do not possess the eyes of God. They do not hear when He calls them to listen. They do not feel when hearts are broken by their words.

Rather, God says, “come to me, all you who are weary and are carrying heavy burdens… I will give you rest” (Matthew 11:28). Even when you feel inadequate or like you have done wrong, know that you aren’t and that you haven’t. All that matters is that you be a kind person who lives life with empathy for others and peace in your heart.

If you live your life honestly and compassionately, you need never ‘hope’, worry or wonder if you are worth it. Love will come to you in this life and the next.

If you enjoyed thinking about Hope There’s Someone, take a listen to another song by Antony and the Johnsons, For Today I Am A Boy, from the same album.

Refugee Week: What is it, why do we celebrate it and why is it so important – especially this year?
World Refugee Day
Pure exhaustion: the Queer Christian Experience