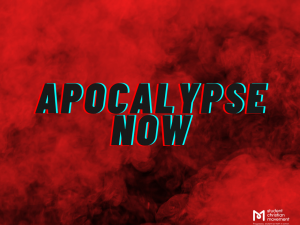 Having endured months of a global pandemic that has upended nearly every aspect of our lives, it is understandable why some people have described this year as apocalyptic. We are certainly living in tumultuous times as we experience the impact of a pandemic while also facing an economic crisis and an impending ecological catastrophe. With swarms of locusts in East Africa, wildfires in Australia, political turmoil in the United States, and the continuing uncertainty over Brexit, it is not difficult to see why some people have felt that the end of the world might be near.

Throughout history people have responded to times of upheaval, like those we are currently living through, by using the imagery and language of apocalypse. Apocalyptic stories can be understood as an attempt to make sense of events that are scary and unpredictable. After all, to treat war, famine, and natural disasters as being the actions of some “supernatural” power at least gives them an explanation. Yet, this apocalyptic imagination is not limited to ancient people and religious texts; our culture is full of apocalyptic visions. Just think about the many ways the world has been destroyed in books, television, and film. In fact, there is now a whole industry that exists to meet the needs of those preparing for “doomsday”. However, if you are anything like me, then your “doomsday” preparations consist of little more than buying a few extra tins at the supermarket or stockpiling toilet roll.

While the term “apocalypse” is frequently used to describe times of disruption, the original Greek word––apokalypsis––can also mean unveiling or revealing. An apocalypse is not always about the end of the world, but an event that helps us to see what was previously hidden.

For instance, over this year we have come to realise just how fragile the foundations are on which our society is built: our national health service has been stretched to capacity, millions have been made unemployed, and the future aspirations of an entire generation have been thrown into question. This time has exposed the fault lines that already existed in our society––fault lines caused by injustice and underfunding but which many people have only just noticed because of the stress that we are now all under.

But this year has not been all doom and gloom. It has also reminded us about what matters most: family, friends, spending time with other people, being able to travel and the simple joy derived from going outside. We have seen how communities can pull together to support those in need and celebrate the contributions made by essential workers that often go unrecognised. In many ways, this year has revealed to us how we might create a friendlier and fairer society.

Thinking about the apocalypse less in terms of destruction and more as a time during which things that were hidden are revealed, is one way we might receive Jesus’ instructions to keep awake and stay alert (Mark 13:33-35).

Advent is normally a time when we are caught up in the frenzy of preparing for Christmas: there are gifts to be brought, decorations to put up, and parties to attend. But this year much of that will be missing. Instead Christmas will be much simpler for many of us––not cancelled, as some have claimed, but certainly different. While this may cause us to feel upset, it is also an opportunity to slow down and to remember what truly matters. Advent this year presents us with space to acknowledge the things that often go overlooked.

Jesus speaks about great signs and wonders not as a means of predicting when the end will come but as moments where a new world is breaking into the old. For this reason, in the Christian imagination, the end of this age is about transformation more than destruction. It is about how God is working to make all things new and how in Jesus he calls us into the fullness of life. So, as followers of Jesus, we are instructed to stay alert for those signs of where God is working; where the Kingdom of God is breaking into our present; and where new possibilities arise.

These signs can be found in both those moments in our lives when the world seems as it should be––in moments of love and laughter, beauty, and friendship––and where the realities of the world make us cry out in protest: “No, this is not as things should be!”

This Christmas will be difficult for many of us, it may even feel apocalyptic, but instead of focusing on what we have lost perhaps we can seek to be more attentive to those places in our lives where God is working and where beauty, love, and truth are already present. May these moments of grace fill us with hope and encourage us to seek the Kingdom of God that is already breaking into our world.

So, as Daniel Berrigan writes in his Advent Credo, ‘let us enter Advent in hope, even hope against hope. Let us see visions of love and peace and justice. Let us affirm with humility, with joy, with faith, with courage: Jesus Christ—the life of the world.’

Modified from a sermon given on the first Sunday of Advent at St. David of Scotland, Scottish Episcopal Church, Edinburgh by Ross Jesmont.

Ministry Experience Scheme
Unpacking ‘bigger is not always better’: bodies, food, and health on the Church Time's front page
Hope in the Midst of Climate Crisis