Archbishop Óscar Romero – A Life Lived Through Faith in Action 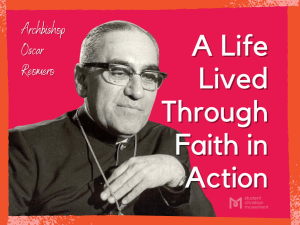 Back in January, following the death of Archbishop Desmond Tutu, I wrote a blog exploring how he represented a brilliant example of someone who throughout their life constantly put their faith into action. This got me thinking of other people whose lives also act as examples of faith in action. One such person is Archbishop Óscar Romero, who was assassinated on the 24th March 1980 for his work championing the poor and oppressed in El Salvador. Romero’s life, and indeed his death, prompted the UN to designate the 24th March as the International Day for the Right to the Truth Concerning Gross Human Rights Violations and for the Dignity of Victims in memory of his work.

Unlike Tutu, whose example of faith in action I was alive to witness for myself, Romero had been dead just shy of eight years when I was born. As such, my knowledge of his life and how his faith inspired his commitment to social justice comes mainly from GSCE and A Level religious studies lessons, some background research into the civil war in El Salvador when studying for my MA, and from human rights organisations that still celebrate his life’s work. However, the fact that I, and many others who draw inspiration from Romero’s work, were not alive to hear about this in real time is exactly why I think Romero is a great example of faith in action. His legacy continues to inspire and to challenge us 42-years after his death and, as Associate Professor of Theology Michael E. Lee explains, ‘his memory is linked to a particular way of seeing faith today as indispensably linked to efforts towards peace and justice.’[i]

So, who was Óscar Romero and how does his life act as an example of faith in action?

Romero was born in Ciudad Barrios in El Salvador in 1917 and was ordained as a priest in 1942. In 1970 he became an Auxiliary Bishop to San Salvador, an appointment that was not universally celebrated among Priests. This is because, at that time, Romero was unconvinced by the growing focus on social justice within the Latin American Church and ‘was suspicious of the clergy and the Base Christian Communities of the archdiocese working alongside the exploited rural poor, promoting social organisations and land reform’[ii].

In 1977, in a climate of growing social and political tension, Romero was appointed as Archbishop of San Salvador. His appointment was supported by the junta government and the wealthy elite, who considered Romero an ally and someone who could be trusted to tow a conversative line and help to offset the growing popularity of liberation theology. However, the idea that Romero would stop priests from supporting and speaking out in favour of the poor was short lived.

A few weeks after his appointment to Archbishop, Romero’s friend Father Rutilio Grande was assassinated for his work organising the poor. This, along with time spent among the country’s working poor, is considered a turning point in Romero’s ministry. In a matter of weeks following Grande’s assasination Romero had become an outspoken champion of the poor and oppressed in El Salvador, using his prominent position to be an outspoken critic of the ruling elite. He openly opposed the fact that 60% of land in El Salvador was owned by 2% of the population and was fiercely opposed to the class system, famously asking ‘by what right have we catalogued persons as first-class persons or second-class persons? In the theology of human nature there is only one class: children of God’[iii]. He also denounced those who claimed to be Christian but prioritised their own wealth above all else, stating ‘how many there are that would do better not to call themselves Christians, because they have no faith. They have more faith in their money and possessions than in the God who fashioned their possessions and their money.’[iv]

Between his appointment to Archbishop in 1977 and his assasination in 1980, social and political tensions continued to rise in El Salvador. It was commonplace for members of the rural poor and activists who opposed the junta government to be assassinated, and the military popularised the slogan ‘Be a Patriot - Kill a Priest’[v]. Yet, Romero refused to be silenced. Instead, he continued to speak out, ‘he denounced the killings, the torture and the disappearances of community leaders; he demanded justice and recompense for the atrocities committed by the army and police and he set up legal aid projects and pastoral programmes to support the victims of the violence’[vi]. Moreover, he spoke out against the guerrilla warfare perpetrated by the left. In a time of violence and chaos he chose the path of peace – constantly preaching reconciliation and justice for the oppressed.

As Michael E Lee explains, during this period Romero was an ‘exemplar of the “field hospital” church that cares for the wounded, defending them and not its own place in the world.’[vii] Unsurprisingly, this did not make him universally popular. He was attacked by the press; wealthy Catholics denounced him to Rome; security forces harassed him; several episcopal colleagues publicly opposed him; and the radio station through which he broadcast his sermons each week was bombed on more than one occasion. Yet, Romero refused to be silenced – even when it became apparent that by speaking out he was putting his own life in danger.

Then on the 23rd March 1980 Romero delivered perhaps his most famous homily, in which he directly addressed members of the military – telling them ‘it is time to regain your conscience. In the name of God and the name of the suffering people, I implore you, I beg you, I order you, stop the repression!’[viii]. Some colleagues and friends of Romero’s have since said that on that day they knew the ruling elite and military would not allow this to go unchallenged – and they were right. The next day at 6.26pm, as he was saying Mass, Romero was shot and killed.  According to findings of the UN-created Truth Commission for El-Salvador, Romero’s assassination was ordered by Major Roberto D’Aubuisson. However, no one has ever officially been convicted for this crime[ix].

When we consider how Romero’s life exemplifies one of faith in action, I think this can most clearly be seen in these words, uttered just before he was shot: ‘we know that every effort to better society, especially when injustice and sin are so ingrained, is an effort that God blesses, that God wants, that God demands of us.’[x] Romero didn’t just preach these words, he lived them out – paying the ultimate price for them.

Ultimately, despite his best efforts, Romero was not able to stop the violence that was engulfing El Salvador. His death came towards the start of a bloody 10-year civil war that saw more than 75,000 people murdered or disappeared. Yet, the impact he had continues to be felt to this day – not only in El Salvador but across the globe. He was canonised by the Catholic church in 2018 and he is remembered and admired for his tireless work on human rights, not only among Catholics and the wider Christian faith, but among secular organisations too. Forty two years on from his death ‘those who struggle for justice, seek to defend human rights, and search for peaceful solutions to violent conflicts can look to Óscar Romero for inspiration’[xi].

It is evident that Romero was a man of a committed faith, who died in the name of justice during the rise of an unjust civil war. If ever there was a modern peaceful hero to look to during times of conflict and struggle, who embodies what it means to live out our faith in action, it would be him.