From the Archives: Living with Aids 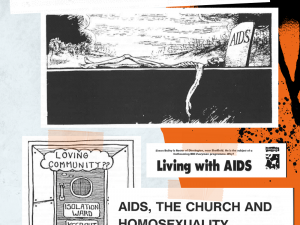 Please note that the articles published in Movement Magazine some decades ago do not necessarily reflect the views of SCM now, its staff, its trustees, or members. These articles are provided to demonstrate the history of SCM in relation to LGBTQ+ history. This article is from Movement Magazine Issue 89 - Spring 1995.

Content Warning: This blog post contains descriptions of living with AIDS that are graphic, medical, and may be upsetting.

My name is Simon Bailey. I’m 39 years old and I’m living with Aids. I was diagnosed HIV+ 9 years ago and for the last year or two I’ve had very low CD4 count – the blood cell count they use as a very rough guide to the strength of the immune system. I am living with two major consequences of the virus at the moment so I describe myself as ‘living with AIDS.’ I want to say a little bit about what that means for me.

‘Living with AIDS’… the phrase is nicely ambiguous. I’m living with it in the sense of ‘putting up with’ this deadly presence in my body but I’m also ‘living with it’ rather than ‘dying from it’: I’m not a ‘victim’ or a ‘sufferer’. I’m a human being living as hard as I can with a threat to my life. I want to say something about that but I don’t want to be melodramatic or sensational but as honest as I can be.

This is peculiarly personal virus – and people react to their positive status in all sorts of different ways. Some people go wild – they’re going to die so they might as well seize every possible opportunity for pleasure and enjoy intensely every single moment that’s left. I haven’t done that. Some people become deeply depressed, suicidal and acutely, permanently afraid. I haven’t done that. People do all kinds of things. Some people struggle to carry on as much as possible as before, living as intensely as possible, coming to terms with new limitations, weakness, even disability, but struggling to keep living, to find courage, to set their house in order, to complete unfinished business, but above all to keep living, never giving up, hoping but being honest. I’ve done something like that – or I’m trying to.

I have cryptosporidiosis – a bacterium lodged in my gut which prevents me taking nutrition from food. It’s been there probably for 2 or 3 years. It causes excessive diarrhoea and steady weight loss. Malnutrition basically. I got down to 6 ½ stone. A year ago, after exhausting every other treatment they inserted a catheter in my chest and now, at home, for 12 hours, 5 nights a week, I’m feed intravenously on a white liquid – TPN – straight into my bloodstream. I now weigh about 8 stone and have enough energy to keep working, to keep living. Without TPN I don’t think I’d be here at all.

In February last year, I went for my weekly examination at the clinic. On that visit they noticed viral activity in the eyes. Cytomegalovirus retinitis. Without treatment I could now be blind. As it is, my vision in my right eye is limited and is worsening – so I’ve started yet another drip which means I’m hooked up to my drips for about 15 hours a day, most of the week. I do enjoy the free days. If you told me two years ago this would happen I’d have said I couldn’t cope I’d rather be dead. I am living – with AIDS. It’s amazing how much living you can still do hooked up to a drip.

I am frightened. I’m frightened of pain – but, so far I haven’t had much of that. I’m frightened of being dependent though some of that is pride. I’m afraid – maybe more than anything else – of my mind going. I live so much in my mind, the thought of dementia is frightening. Almost every time I forget something now I have a little shiver of fear. It’s not comforting to think – as someone told me – that if my mind foes I’m not going to realise it – others will hurt for me and I hate the idea. I hate the indignities of this virus – the seemingly minor ones are the worst diarrhoea, vomiting, side effects of drugs, the inability to run, to dance, to stand for too long. That’s when I cry and pray for courage, courage not to give up. I’m sad at things I’ll never do again. Never.

But I’m not afraid of dying. Not yet anyway. I feel as if I’ve faced it – face it, live in its face – but I’m not frightened. I hate waste and feel sad at the waste of years I might not live but I feel as if I have packed in quite a lot already. I’ve done – I do – the job I so much wanted to do. I’ve written some of the things I wanted to write. I’ve done many of the things I wanted to do. And I’ve loved and been loved.

And, as for many people in this situation – living with the prospect of dying, life does take on a vivid intensity. Relationships deepen, family, friends – there isn’t time to waste by not saying and showing what you feel. Colours are more real, beautiful things, places people are more overwhelming, captivating, alive. Sometimes it does all dissolve into pointlessness and futility and frustration but most of the time – so far – I live as strongly as I can.

So what about the church? I want it to care for me, to help keep me living, to be with me. It moves me deeply to be able to say that at a personal level that is what the church is doing for me. Especially locally. On a more general level I’m not so sure. It’s patchy. The church still finds it difficult to talk about, to be clear, to be openly and emphatically compassionate: still less lead the way. Blame and guilt inducing prejudices and fears still lurk about because the church is a long way from sorting itself out on sex and sexuality and homosexuality.

I’ve made a programme with the BBC for the Everyman series about living with AIDS and still being a parish priest. Some people think I should have kept my head down, kept it as secret as possible, not disturbed the ‘peace of the church.’ But I can’t keep living and keep this a secret. It raises too many important questions – for me, for the Church. So this may hurt too. I may need more courage, but living like this in the face of dying is somehow making me braver, more vigorously alive, more courageous than ever I thought I could be.

Simon Bailey is Rector of Dinnington, near Sheffield. He is the subject of a forthcoming BBC Everyman programme, 'Why?'.