From Communard to Catholic: An Interview With Richard Coles 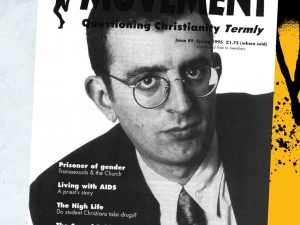 This interview was first published in Issue 89 of Movement magazine in the Spring of 1995.

When ex-Communard Richard Coles began his theology degree at King’s College, London in 1991 he was expecting to be the only ex-popstar on the course. He was peeved to find that he wasn’t. In the year above him was the saxophonist from Roxy Music and his own year boasted a Pentecostal minister who had written songs for Sinitta.

Remember The Communards? Eighties pop with an edge; overtly gay, left-wing, high-pitched vocals and very danceable. Coles was the one who wasn’t Jimmy Somerville. He got religion four years ago and at 32, has never felt happier Christianity had lurked in the background as a child but when Coles grew up he decided it was nonsense. He began to feel a new need for it when his life became unpredictable. Now older, wiser, wearing jeans and a stripey top, ear-ring in one ear, cigarette in hand he describes that time:

‘It was a very odd, turbulent time – partly because success with the Communards changed my life dramatically. In the space of a few months I went from living in squats in London with no money, to staying in posh hotels, cut off from my friends. It was also the time when the AIDs epidemic arrived and began to bite. It really was the best of times and the worst of times.’

‘A song of ours was number one in Spain and we were there for this show like Top of the Pops. We were waiting to go on TV when we got a phone-call to say a friend of ours had just died of AIDS. It was weird having to go on and be happy at this number one, whilst coping with this awful news about our friend. It was very difficult to handle. Pop success and the necessity of coping with the AIDS crisis were bigger than I could comfortably control and though you think you can deal with it, these things really deal with you. After three or fours years of that I was in orbit really so I needed some time off to calm down and find my feet. I stopped working with Jimmy Somerville in 1989, then spent a year taking lots of drugs and having a good time. In retrospect, I was as mad as a meat-axe.’

It was around this time that Coles felt himself increasingly curious about Christianity and, in spit of the appalling prospect of its untrendiness, began to try out a few churches. He found himself wanted to be a participant rather than a spectator.

‘The most intense experience I had was the first time I went to a Mass. I remember being overwhelmed with desire to share in the Eucharist. I’d gone as a spectator but as soon as I entered into it I realised that this was something that I deeply wanted. I’ve always been a sucker for dramatic things; with the bells and the incense billowing and the elevation of the host; I was completely overwhelmed. That’s why I bother with it now, more than anything else; because there are parts of it I get there that I don’t get anywhere else; the Eucharist, Absolution. That’s what really drove me through the door.’

Living through a time when many of his friends were living and dying with HIV/AIDS obviously deeply affected Coles. He explains that it was not the only factor in coming to the Church but it certainly accelerated the process.

‘Its not the case that I became a Christian because of AIDS. It has been very difficult to handle, especially in a group of relatively young people with the expectations young people have of living forever and not ever suffering. Sooner or later it would lead most people to ask questions which as religious. Also, if everyone is dropping dead all around, you feel a real need for consolation, which the churches are very good at providing.’

Coles found the image of the crucified Christ particularly helpful at that time. He says:

‘When you encounter suffering in life, if you want to really grasp it then you must look to the image of the crucified Christ because, no matter how awful things become, it cannot take one iota from what has been done for us in Christ’s death on the Cross. Christ is very central for me; and without that figure at the centre for me, Christianity really falls apart.’

Coming to the Church absolutely afresh, Coles opted for Roman Catholicism, primarily attracted by its sacraments and ceremony. He agrees the choice was odd:

‘It seems odd to a lot of people! I’m not the greatest devotee to rigorous Catholic orthodoxy but for better or for worse, its where I choose to be. It’s a love-hate thing for me; there are things which I love and find completely natural and feel totally at home with but other things I find very difficult. I love the sacramental ceremony and unfashionable things like the rigour of it, the toughness of it.’

Coles admits to also being attracted by the internationalism, foreign-ness, and ‘glamour’ of Catholicism as well, pointing to a buried childhood memory that added to its mystery.

‘My grandfather was quite anti-Catholic because he’d been brought up in a West Country low Church where Catholicism was something sinister. When I was a child he told me to hold my breath when I went past the Catholic Church in case I breathed in incense. That was immediately intriguing.’

Coles is by no means just a glamour-fiend though, proceeding to outline his concerns about Catholicism.

‘I’m much more on the liberal wing of the Church. Being gay obviously brings you into sharp conflict with the Church on very particular issues. I resent that and the present Papacy isn’t particularly congenial on such matters. Its long overdue that the Church looked at questions of sexuality in a more relaxed and better-informed way. There’s quite a battle at the moment where conservative-minded Catholics have the advantage but I don’t suppose it will be like that forever. Catholicism is more than questions about sexuality. It’s an enormously rich and complex faith which I find completely compelling and wish to be part of, though sometimes I feel my tenancy might be coming to an end. I don’t expect it to be congenial all the time; I don’t think it’s the business of Christians to expect a completely comfortable environment. The most important thing is that the Church changes, in spite of what you read in the papers.’

Coles insists that for change to happen, Christians have to make themselves heard, both as individuals and through campaign groups like Quest (the Gay Catholic Group) and LGCM. His devotion to the Church would seem misguided, were it not so passionate. He insists:

‘Its no good just throwing your hands in the air and saying they’re all a bloody awful bunch of homophobes and running away. It would be a dereliction of our responsibilities. We must fight for these issues within the Churches. The things that distresses me most is when people conclude that the Church is just a very conservative institution and give up on it. The Church is far too important to be left to the likes of Nazis – I mean that in a wonderfully warm, supportive way.’

Coles manages to combine his realism about living with the shortcomings of the Church with an inspiring idealism. Convinced that the Church cannot help but be political, he thinks it could use its power more wisely. Asked how he would particular like to see it change he offers this:

‘Id like the Church to be able to affirm gay relationships, to be more open and understanding about the nature of human sexuality. I hope for a day when gay people expressing their sexuality would be able to take up places in the Church. Id like the place of women in the Church to be improved. Personally, I see no theological problem about the ordination of women to the priesthood. That might sound blindly optimistic but that’s what Christianity is all about.’

Ecumenism is also something Coles would like to see more of in the Church and, despite his own preference for Benedictine liturgy and Gregorian Chant, he is quite prepared to share in other forms of worship.

‘I’ve got much less snooty now and will quite happily take part in worship that would have previously made me throw up! Not because I like them any more, but I do see the importance of Christians sharing in other peoples worship. We’ve got a Priest from Trinidad at Church at the moment and the other day he snatched up a guitar and I found myself singing ‘Here I am Lord’ – I thought it was great but I did find myself thinking, ‘O God if my friends could see me now!’’

It must have been quite a shock for friends of Coles to find the spokesperson for left-wing values of Red Wedge suddenly more concerned with plain chant than pop. He recalls their reactions with a grin:

‘At first it was quite difficult – to my friends the idea of a gay man becoming a Roman Catholic was like a black man joining the National Front. It was seen as bafflingly treasonable. As life went on and they saw that I was happy, they accepted it. They thought I was a bit mad at first. But its not insanity. Christianity is so unsexy though. Especially coming from a background in pop music. I remember having ideas about having to stand in a dreadful M&S cardigan, swaying from side to side and praising the Lord. It seemed intolerable because it seemed so frumpy. In fact, I think Christianity is very frumpy’.

But, as Coles himself says, there are worse things to be than frumpy.

At the time of the interview Richard Coles was a post-graduate theology student, broadcaster and musician. He may no longer hold any of the views outlined in this blog!