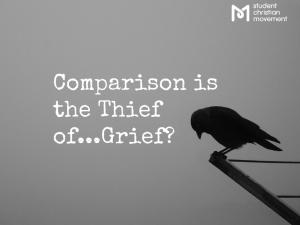 “Don’t stress mate. At least you had some wine.”

I have a memory from my temperamental mid-teens, of sitting on a park bench sobbing about a row I’d had with a school friend. An older gentleman, passing by with his dog, stopped for a moment and said “cheer up love, it could be worse”, before describing some of the terrible things he had been through in recent years. Serious illness. Bereavement. Loneliness.

Of course, I felt sorrow for him. Who wouldn’t? But did hearing his in-the-grand-scheme-of-things-rather-worse-than-mine problems make me feel any better? No.

“It could be worse” is a phrase I find immensely problematic, along with its cousin “at least you have your health.” As if you are only permitted to express sadness if your particular problem is among the most serious. As if all feelings of loss must be set on the scale against feelings of gratitude for what you have, and you may only express the sum total.

It’s a thought I’m often struck with when I read Jesus’ miracle of turning water into wine. During his ministry, he’ll do some pretty big stuff in the way of miracles. Like, literally raise people from the dead. But at the wedding at Cana, he is showing empathy for a problem that’s basically just an embarrassment. Admittedly, culturally it’s a pretty big embarrassment, but no-one’s going to die if the wine runs out. The feeding of the five thousand is similar. Personally, I’d have been inclined to tell them to just have a late supper when they get home. But even moderately growling tummies are looked on with pity by Jesus.

The Covid-19 crisis has affected us all differently, and – I’ll put my hands up – the problems I’ve experienced are incomparable with the pain and grief that many people throughout the world are enduring. They are also incomparable with those who are facing the collapse of their small business, the inability to pay the rent, the threat of eviction. It’s tempting to say ‘they’re nothing compared to’ these other problems. But that wouldn’t be true. They are incomparable. But they aren’t ‘nothing.’

The word ‘grief’ refers to the sorrow that follows on from loss. Of course, the death of a close friend or family member is the most intensely painful type of loss, and those who have lost loved ones describe a grief that is impossible to ‘get over’ but must gradually become part of life. But we can grieve other losses too. The loss of place and proximity to friends. Disappointments, dreams unfulfilled, things not turning out as we expected. The moving on from a life stage. An experience that some of you may be going through at the moment is that of grieving the early end of your time at university, the opportunity to finish exams and say goodbye to friends in the way you would have liked. Even those not finishing this year may feel a great sense of loss at having some of their time at uni snatched away.

The good news is that, unlike grieving a death, we can fully expect to come to terms with this sort of grief eventually. But that doesn’t mean that there isn’t a process to go through. Shock, frustration, anger and blame may well be a part of that. If that’s where you are at the moment, please don’t let anyone tell you that you’re not allowed to feel as you do because, say, you’re lucky enough to have home and health, friends and family, and the opportunity to continue your education online. Give yourself permission to be honest with God about how you feel. And find a good friend to offload to. Someone who won’t put your feelings in a box.

Things that Jesus did not say: “Don’t stress mate. It’s only the wine that’s run out. At least you had some wine.” Instead he instructed the servants to fill the stone jars with water so it could be transformed. Six giant water jars took time to fill, before the miracle took place and joyful celebration could resume. So give yourself time.

The Theology of Trauma