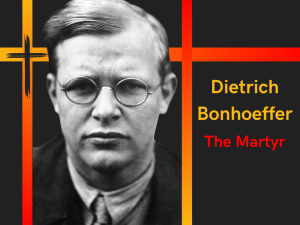 A martyr is someone who is executed because of their religious beliefs, i.e. their refusal to denounce or change their religion nor condone the contrary values of an external party. Martyrdom refers specifically to the persecution they endure leading up to this moment.

The martyr rarely intends to die; however, their death marks a crucial turning point, a change in tide, in the activism they pursue. They become more than merely people of the past; martyrs become legacies for the future.

While Jesus can hardly be called a martyr, but a saviour, his death is arguably the most famous example of self-sacrificial suffering in history. “By his wounds you have been healed” and by his death you have been saved (1 Peter 2:24 NRSV). Believed to have been whipped 39 times (2 Corinthians 11:24), for any more than that would kill a person (Deuteronomy 25:1-3), the martyrdom of Christ is reflected in the suffering of those who died in his name for centuries to come.

According to the Oxford English Dictionary, sacrifice can be understood as giving something up “for the sake of another that is higher or more urgent” (2). This does not have to involve death, but it must involve loss; sacrifice for the sake of someone else, for example. Therefore, to be a martyr is to die self-sacrificially; usually suffering for a long time before their death, martyrdom represents the relentless promise of the persecuted when they are faced with their own mortality. Though the body may die, what makes a martyr immortal is the passion their wrongful death evokes in others. Broken-hearted, oppressed and impassioned people, they will be the ones to carry the martyr’s legacy into the future of activism.

Dietrich Bonhoeffer was a Lutheran pastor and theologian living in Germany during the rise of Nazism. Accused of participation in this failed 20th July plot to assassinate Adolf Hitler, Bonhoeffer was executed on 9th April 1945.

In order to understand the significance of Bonhoeffer’s death, it is important you also know about his life - here is a brief timeline to bring you up to speed.

One thing that separates Bonhoeffer from other Nazi resistors is that his life and theology is documented in the literature he wrote, which we’ll discuss in more detail in our next series’ blog. He was faced with a world incomparable to any biblical parable. Every fear and uncertainty he had saturates the inky pages of his books and letters. People today can hold aspects of Bonhoeffer’s mind in their hands. They are monuments to his martyrdom and the internal suffering of a person who once thought pacifism to be the only route to justice.

Bonhoeffer contemplated and studied relentlessly his religion before taking any action in defence of it. Even the nature of the ‘action’ he was taking evolved over time as he continued to make sense of his duty as a Christian. In 1933, he was peacefully expressing his concerns about Hitler. By 1940, his previously unwavering perspective on pacifism had shifted as Bonhoeffer began contributing to plans to assassinate him. On 20th July 1944, a bomb was detonated in the conference room of the Wolf's Lair. Three people died. The Führer was not one of them.

Whether Bonhoeffer identified as a pacifist or a cautious militarist on the day of his death, neither system of belief truly discusses the issue of responsibility. Bonhoeffer, however, thought so profoundly about his role in the resistance that he contemplated not only his responsibility as an opponent of the Nazis but as a child of God. There is something both frightening and reassuring in the knowledge that some people are willing to kill and die for what they believe despite their devotion to the God who said, “you shall not murder” (Exodus 20:13). Though Bonhoeffer never stopped believing that “grace and discipleship are inseparable” (3), as the rattling chests of black-shirted crowds continued to send cracks through the earth beneath them, the path to peace became obscured by the broken glasses and tattered shoes of missing people. Grace and discipleship, though still inseparable, took on new definitions in the face of totalitarianism.

Aside from his literature, what also makes Bonhoeffer such an important member of the resistance is that, throughout his later life, he changed his mind regarding what his duty looked like. Bonhoeffer was willing to learn, relearn and lean into the pain of uncertainty because he knew it was necessary to be sure. Faith is a medium for justice, meaning, life cannot be lived quietly. Bonhoeffer can be considered a modern martyr because he died, yes, in the name of God and discipleship; but, more importantly, in the pursuit of freedom for all. He died in the light of costly grace and sacrifice as Christ did before him and others will come to do.

In connection with the 20th July plot, 7000 people were arrested. Nearly 5000 of them were executed. For International Holocaust Remembrance Day, SCM uploaded a post recalling the stories of six resistors killed by the Nazis. Two people on this list were executed alongside Bonhoeffer. Another was his brother-in-law who was hung to death on the same day at a different concentration camp.

So, why do we remember Bonhoeffer? Why not the 5000 others?

Discipleship is a powerful thing, it’s cost even greater, but its disciples are not remembered equally. Below are the stories of some religious leaders and pacifists who opposed the Nazis. They met the same end as Bonhoeffer but never impeded their pacifism.

For you, even in exceptional circumstances, should basic Christian ethics ever be compromised?

The people of the past who we choose to look to for guidance often give us insight into what type of activism we deem most effective as well as what type of activists we desire to become. The martyr can inspire action in others because they represent the power of protest, which is so often underestimated as a legitimate long-lasting medium of change.

You do not have to agree with Bonhoeffer’s alleged participation in the assassination plot. It's important for your own understanding of activism to think carefully about who you desire to learn from. Just because SCM have multiple blogs and events dedicated to the life of Bonhoeffer does not mean you must seek guidance from him too. There are thousands of people from across history whose actions in exceptional circumstances will align more with your values, particularly if you are unapologetically peaceable. However, just because a martyr inspires you doesn't mean that is a calling you should seek for yourself. There are often better ways to achieve change than by losing your life. When protesting, however big or small your participation, always remember to stay safe.

Regardless of what you think of Bonhoeffer’s approach to protest or the moral conflict he suffered even after his imprisonment, in your opinion, what makes a martyr?

Kierkegaard, S. and Dru, A. (ed.) (2003). The Soul of Kierkegaard: Selections from His Journals. New York, United States of America: Dover Publications. Page 151.

Pure exhaustion: the Queer Christian Experience
Leymah Gbowee (and the women of Liberia) – A Life Lived Through Faith in Action
Bob Dylan - With God on Our Side