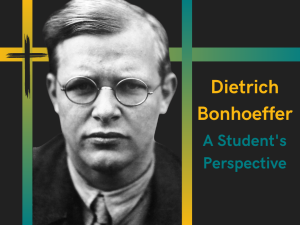 At first I was intrigued to hear that the workshop we had booked for our SCM group that week was going to be on the ‘ethics of killing’. Originally, we had advertised that there would be pizza, to try and attract more people, which now seemed to make some light-heartedness of the topic!? Perhaps why I was so intrigued when hearing the title is that, to me, SCM stands for social justice. In my head the ethics of killing and social justice didn’t fit as well as they maybe should have.

The main focus of the workshop was the life of Dietrich Bonhoeffer who lived in Germany during the second world war. As Hitler rose to power Bonhoeffer had written a book called ‘The Cost of Discipleship’ offering a radical Christianity based on a radical Jesus. He acted against the Nazi regime by rescuing Jews from within the German secret service and was part of a plot to assassinate Hitler.

Is the murder of someone ever just?

Where does our moral compass come from?

These questions transported me back to my GCSE Religious Education class, a place I thoroughly enjoyed, to the horror of my classmates, but a place where my world views were quite different to today. Perhaps the biggest impact was discovering my sexuality - not being heterosexual as everyone, including myself, presumed - opened me up to a more liberal, inclusive world view. Whereas before I had quite a narrowed, conservative view of the world being a part of the Evangelical Church. Back then it felt almost easy to answer the ‘big’ ethical questions because I took the Bible so literally, the theology was already there! Now, understanding that the Bible really needs some historical context to be fully understood, I have found it more difficult to answer those same questions. This workshop helped to challenge me to use my new perspective to answer those questions again.

We couldn’t have had the workshop at a more relevant time with a new war starting in Ukraine. Bonhoeffer shows us that even under Nazi oppression we can still make justice happen. My heart was lifted to see the Russian people protesting against the war in Ukraine.

Would I have stood with them and become a part of a radical Christianity that I had previously only admired? I hope so.

Debating the ethics of killing and the incredible work of Bonhoeffer has shown me you don’t have to be so sure about the meaning of particular verses to be part of radical social justice. Liberalism doesn’t mean you have to stay quiet; the main message of Jesus is to show love to all, including the oppressed in society, and to act for social justice as a result of this love.

This is one of my favourite quotes from Bonhoeffer so far, which he penned on 18th July 1944 while in Tegel Prison: "To be a Christian does not mean to be religious in a particular way, to make something of oneself (a sinner, a penitent, or a saint) on the basis of some method or other, but to be a man [sic]—not a type of man, but the man that Christ creates in us. It is not the religious act that makes the Christian, but participation in the sufferings of God in the secular life."

If you are interested in learning more about Dietrich Bonhoeffer, a workshop with your society can be booked by emailing alana@movement.org.uk.

Join SCM in August (2nd – 5th) on a trip to Berlin to learn more about Bonhoeffer and visit the places he lived and worked during his courageous journey of discipleship.