In the Garden of Gethsemane 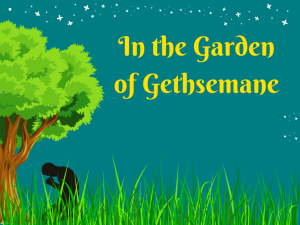 In October 1971, a rock opera based on the Passions of Christ premiered on Broadway shortly before opening in the Westend. Inspired by a single line from Bob Dylan’s song With God on Our Side (1), which we’ll discuss in our next Everyday Theology blog, lyricist Tim Rice and composer Andrew Llyod Webber told this dramatised version of the biblical story largely from the point of view of Judas Iscariot.

Jesus Christ Superstar, despite controversial accusations of irreligiosity and blasphemy by some, has become one of the most beloved musicals ever created.

Here is a link to Ted Neeley’s classic performance of Gethsemane in the 1973 film version.

The purpose of this Easter blog is not to urge you to watch Jesus Christ Superstar or even agree with its dramatisation of the biblical story and absence of the resurrection. Rather, I encourage you to use Rice and Webber’s song to address honestly what aspects of Christ’s character you are drawn to most. What about him inspires your faith in Christianity?

Trinitarian Doctrine states that God exists equally as one god in three forms: the Father, Son and Holy Spirit (2). As a result, Jesus is widely understood as 100% human and 100% divine (John 1:14), possessing the innate qualities and understandings of both. Notably, during Easter, significant focus is placed on the belief of saved souls and salvation as a result of the crucifixion. Jesus Christ Super, on the other hand, focuses on the human aspects of Christ’s identity. While it is this very speculatory portrayal that caused some people to protest the musical’s initial release, there is, arguably, more to be learnt about the Godhead in the humanity of Christ than his divinity.

Do you relate to Christ more on the basis of his divinity, humanity or both qualities equally?

Is it Jesus’ power to save and heal that makes him God? Or is it his ability to suffer (Luke 23:26-49) and his desperation to forgive (Luke 23:34) and to “increase in wisdom… and in divine and human favour” (Luke 2:52 NRSV) that makes him a God worth hearing?

Have a listen to Ben Forster’s powerful version of Gethsemane from the 2012 contemporary reimagining arena tour.

While each New Testament account is slightly different - for example, in John 13 Jesus is relaxed when predicting his fate even telling Judas “do quickly what you are going to do” (27) - other accounts of this period leading up to Jesus’ death tell a slightly different story. The restlessness of Jesus is recounted most clearly in Matthew 26 and Mark 14. During dinner, Jesus exclaims “woe to that one by whom the Son of Man is betrayed! It would have been better for that one not to have been born” (26:24;14:21). He is clearly and, understandably, angry at his betrayer. However, the disdain with which he speaks is out of character for someone as gentle as he usually is. In the same verse, Jesus explains that “the Son of Man goes as it is written of him". By this Jesus means that he is predestined to die just as Peter is fated to deny him and, surly, Judas to betray him. Thereby, Jesus’ anger at his betrayer is likely rooted in the fear of torture and death he is experiencing as a human regardless of the fact his godly self knows that Judas has no more control than he over what is contained in the cup that God has handed him.

The biblical passage titled Jesus prays in Gethsemane (Matthew 26:36-46) inspired directly some of Rice’s lyrics. Here Jesus is described as feeling “grieved and agitated” (37), begging his disciples to “stay awake” with him (38) and for God not to hand him the cup filled with his future (39), which is disturbingly described in the song as being filled with poison.

For you, if Jesus’ death was “written” before his incarnation, should that effect the blame with which Judas is saddled?

Here is a unique version of Gethsemane sung by Evan Tyrone Martin.

Jesus only ever called himself “the son of Man”, never the son of God – that was a title pushed upon him by others. Jesus’ fear, regardless of how inexplicitly it may be described in the Bible, represents an aspect of the crucifixion that is often ignored in favour of a conversation about the good that came as a result of his death. In order for us to be saved, the son of Man had to die. Jesus’ loved ones watched him be beaten and bled of life. It would be an injustice to wear a cross round our necks only as a symbol of salvation and not in total remembrance of Christ’s suffering and of those he left behind in bereavement.

Jesus Christ Superstar focuses not on the divinity and powerful ministry of Christ but instead the socio-political factors that influenced him and his followers. Jesus is portrayed as a radical revolutionary acting against those powerful people who oppress the poor and outcast in society. Chipping away Jesus Christ from the stain glass windows of churches and placing him onto the streets we recognise today is one way in which Jesus Christ Superstar has been used by Christians to progress their understanding of scripture. The death of Christ as God led to human’s salvation, bridging the gap between Heaven and earth caused by original sin (Romans 6:23; Acts 4:12); the death of Christ as a mortal human is what makes God someone we can turn to when we’re suffering and lost. Even if it doesn’t feel like it in the moment, He does understand and He will listen.

To end, it’s well worth listening to this expressive performance by Camilo Sesto in 1977.