A Global Community: Updates from the WSCF Virtual EGA 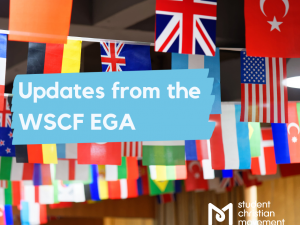 This summer, I represented SCM at the Extraordinary Virtual General Assembly of the World Student Christian Federation, which took place between July 29 and July 31. Delegates from across all regions of the federation came together to worship, study, and elect new officers to the leadership team.

Founded in 1895, WSCF is a global federation of student movements connecting two million members in over 90 countries. WSCF's aims include "to call members of the academic community to faith in God, to discipleship within the life and mission of the Church and to help them strive for peace and justice in and among nations."

The assembly began with worship, led by students and staff of different national SCMs. We then discussed the candidates running for leadership positions and how to vote in the elections.

On the second day, there was an open session titled "looking for justice in a world that is suffering." A Bible Study was led by Prof. Dr. Kuzipa Nalwamba from the Ecumenical Institute At Bossey and a keynote was given by Rev. Dr. Chris Ferguson, General Secretary of the World Communion of Reformed Churches. There was also regional testimonies and closing prayer. All in all, it was a really informative and engaging session.

On the final day, the results of the online ballot were announced. We welcomed the new Officers of the Federation, the elected Chairperson, Geevarghese Mor Coorilos from India, the elected Co-vice chairpersons, Pavlina Manavska from Macedonia and Ramy Farouk from Egypt, and the elected Honorary Treasurer, Ebere Ubesie from Nigeria.

The virtual general assembly was a perfect opportunity to remind ourselves of our greater connection to other Christians around the world. It is amazing to think that there are 2 million students praying for each other globally. The SCMs share so many goals and values, particularly searching for justice, and we should seek out every opportunity to work together internationally for a better world.

Written by Josh Mock. Josh is studying Arabic and Persian at SOAS and is the International Liaison for SCM's General Council as well as a trustee.