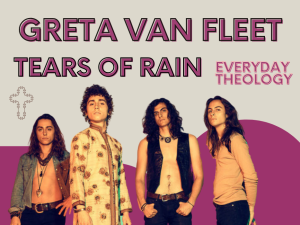 For our next Everyday Theology blog we will be discussing Tears of Rain by Greta Van Fleet.

Commemorated every year on 20th February, the World Day of Social Justice reminds us how social justice for individuals can lead to freedom, security, peace and development for all (1). Particular focus is placed upon issues of poverty, marginalisation, human dignity and gender inequality. While international days can be used to celebrate progress, they are also a stark acknowledgement of what still needs to be done - a task which will take more than a day to do, yet will excel the lives of millions of people if done.

A musical style inspired by the legends of rock and roll, Greta Van Fleet’s nostalgic sound has seen them climb in rhinestone-encrusted attire up the billboard charts. In 2019, their unmatched sound won the band their first Grammy.

Their most recent album, The Battle at Garden’s Gate (2021), draws undeniable links to concepts of conflict, love and creation. The “biblical references” throughout make this album a reassuring anthology for the theological over-thinker (2). Greta Van Fleet are learning to make sense of their world, addressing the issues which face them with maturity and mindfulness. Each song is a “magnification of different cultures and civilizations” (2) all of which are struggling against the competing mechanisms of powerful, but not invincible, nations built by war. Greta Van Fleet’s entire album explores the coexistence of love and battle in a world too complicated to pick sides.

In Tears of Rain, a burning Earth searches for relief from the skies above it:

Bathing in the light around us

Praying for the night to comfort thee

The act of bathing is a significant symbol of nurture in the Bible. For example, infants are cleansed with water at birth (Ezekiel 16:4) and bodies washed at death (Acts 9:37). There is a sense of carefulness and compassion in the act of bathing someone else, often portraying those being washed as in some way vulnerable and without cynicism for the person who bathes them. The act also encompasses the protection of the soul itself when a person is baptised in accordance with the covenant; this is done “not as a removal of dirt from the body, but as an appeal to God” (1 Peter 3:21 NRSV). To be baptised - to hand the safety of one’s soul over to God - requires a degree of trust than only the act of bathing can truly emulate.

However, to be bathed in light is indicative not of vulnerability but of hope. “When I sit in darkness”, in the shadow of war and machinery, “the Lord will be a light to me” (Micah 7:8). Though He clears the path through valleys of darkness, it is important to understand that fear is not a weakness – when “raised in glory… raised in power” (1 Corinthians 15:43), the human soul is unbreakable like diamonds. Though there is comfort in the presence of God, there is also strength in knowing that each day can be as difficult as the last, each night a time to rest and every day an opportunity to start over. So, “separate the day from the night” (Genesis 1:14) because “goodness and mercy shall follow me all the days of my life” (Psalm 23:6), however, to see the sun setting each evening can feel like a triumph. The reoccurrence of nightfall is an opportunity to celebrate survival and take comfort in the certainty that it’ll always return.

Dancing on the coals below us

Praying for the flood to set us free

During his Sermon on the Mount, Christ explains that if someone takes your coat you should “give your cloak as well” (Matthew 5:40). Proverbs 25:21 describes similarly that “if your enemies are hungry, give them bread… and if they are thirsty, give them water”. By doing this “you will heap coals of fire on their heads” for which you will be rewarded by the Lord (22). To heap burning coals on the head of your enemy means to give them what they want and more. Thereby, to dance on the coals, perhaps, is suggestive of rebellion. For example, in relation to World Day of Social Justice, whether denied a living wage, shoved into the undesired corners of illuminated cities or coerced into work that is unsafe or non-consensual, the powerful people who determine this injustice soak cash in the blood, sweat and tears of their victims. When someone’s dignity is taken, they have nothing left to give their abusers nor should they be expected to; righteous though it may be to give them away, the burning coals should remain under the dancing feet of those who refuse to have anything else taken from them.

Much like God’s separation of day and night (Genesis 1:14), the flood will tear abusers from their victims and cool the coals beneath them. God sent the Great Flood in Genesis because He was humiliated by “the wickedness of humanity” and the malice of an earth “filled with violence because of them” (6:5-13). While abuse should seldom, if ever, be ended by brutality towards the abusers, there is something to be considered about the role of divine retribution. In Spielberg’s adaption of Walker’s novel The Colour Purple - the story of a severely abused African American woman – protagonist Celie justifies docility towards her suffering stating that “dis life be ova soon, Heaven last always” (3). While that belief may bring some people comfort, it should never be used as an excuse to knowingly allow the continuation of injustice and cruelty. One does not need to be abused in order to be saved. Though the flood may set free the abused and the coals on which they dance may rattle with spiritual revolt, this is not a reason for others to overlook the injustice taking place nor wait for a deity to intervene instead. Life may be short, however, that is not a consequential reason for it to be unliveable.

Drifting through the plains before us

As it turns to dust before our eyes

Pleading for a god to pour us

Just a little bit of rain from an empty sky

The distinct separation between life and death is a prevalent theme throughout the Bible.  Death is often associated with ash and dust (Genesis 18:27; Job 30:19). The bodily lifecycle, in particular, is portrayed as cyclical since “all are from the dust” and to dust we will return (Ecclesiastes 3:20). This suggests that the song’s description of dusty plains may be comparable to drought, an issue that’ll only worsen if the Earth continues to warm and rain refuses to fall. The deterioration of Earth, which is dying prematurely from the heat above which chars and warps its surface, is largely the result of human obliviousness, denial and refusal to address the issues we have caused - issues that will adversely affect economically vulnerable countries first. Alternatively, or also, this line could be a reference to humans’ spiritual demise. Drought is causing the plains to turn dusty which is indicative of a dying Earth; the gift from God left unhonoured by those who walk it.

Throughout history the pouring of rain has been associated with deities: the Greek god Zeus, Jupiter in ancient Roman and among Ao Nagas in Northeast India there was Lizaba. Similarly, our God of Abrahamic scripture “sends rain on the righteous and on the unrighteous” (Matthew 5:45). Notably, in the book of Job, a narrative centred around the unimaginable suffering of a good man, rain is repeatedly considered by the arid protagonist with regard to the love and power of the God who torments him (5:10; 38:28; 38:37; 28:26; 37:6; 26:8). In terms of social justice, it echoes the marginalisation of people who, though they may dance on burning coals, are living without basic necessities such as clean water. A world without rain is a frightening prospect and a God to whom you must plead for it seems faraway, unaware of the broken bells rung for His return.

As to whether the sky is empty of rain or of the God from which it must be provided is unclear.

And the planet is still turning

And the faces are still burning

And the mothers with their children search for the rain

Whether living in extreme poverty, working in jobs that do not function fairly or suffering as a result of loss, the Earth will continue to spin. Sometimes the return of night is a comfort; sometimes it is a reminder of the lifecycle which contains us, which moves too fast for broken hearts to bear or exhausted hands to grasp. Victims of the informal and illegal economy (who are mostly women and girls; mothers and daughters) are abused in hot warehouses or brothels hidden out of sight to allow the unseeing to believe they are not there at all.

If God will not pour justice upon the unjust, it is our duty to take action to free the trapped, feed the hungry and show love to those unfamiliar. With the help of charities and activists, victims of abuse and injustice can begin to live freely and without fear. This can be achieved only with the devotion of people who refuse to turn their faces away from burning skies because it hurts their eyes. We pray that the turning earth won’t feel so fast and the fall of rain will fill the river to its brim; justice will deluge the hardened ground of dusty plains and night will bath the abused in love’s starlight.

Who will bring the rain?

Taking into account current events in Europe, how does the imagery of war drums and fire make you feel?

In honour of International Day for the Right to the Truth regarding gross human rights violations and the dignity of victims on 24th March, take a look at our workshop outline intended to help guide participants through the acknowledgment of slavery in the Bible.

2) Ehrlich, B. (2020). ‘Greta Van Fleet on the Cosmic Journey to Their Upcoming Album, ‘The Battle at Garden’s Gate’’, The Rolling Stone. Available at: Greta Van Fleet Are Dreaming Even Bigger on Their Next Album - Rolling Stone (Accessed 2nd March 2022).