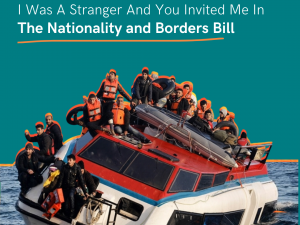 Here at SCM we are in the process of developing a potential new long-term campaign to sit alongside the short-term two-year campaign voted on by the members (currently focusing on food justice).  For this long-term campaign, SCM are creating a social action plan in regard to conflict and the wider impact of war, including the refugee crisis and the arms trade.

SCM will undoubtably remain committed to supporting students in running their own individual campaigns on any other issues they feel strongly about. However, if you’d like to get involved or hear more about our plans, don’t hesitate to get in touch! Both our Project Workers contact details can be found below.

A principal factor underpinning the decision to implement a longer-term focus on conflict and the wider impact of war is our growing concern for refugees and asylum seekers in the UK. This has been made particularly pressing given the unfolding situation in Afghanistan and the Government’s proposed Nationality and Borders Bill, which is currently being passed through parliament. Over the next few weeks, we will be producing a weekly series of themed blogs that examine both the Bill and refugee’s rights more broadly. Each blog will have a spiritual or social justice focus and we will provide you with three weekly calls to action that can be carried out in support of refugees.

For this first blog, we will introduce you to the Nationality and Borders Bill and explain why we at SCM are so concerned about the repercussions it will have on the rights of refugees and asylum seekers.

The Nationality and Borders Bill – what is it and why are we concerned?

The Nationality and Borders Bill aims to make changes to the UK’s immigration system, in particular, the treatment of refugees and asylum seekers. According to the Government, the Bill will help tackle smuggling and trafficking rings operating across Europe. However, refugee charities and campaigners reject this, claiming instead that the proposal will make an already bureaucratic and unfair refugee system more problematic. Furthermore, to moralise the Bill by claiming that it is designed to reduce something as abhorrent as human trafficking while using it, in actuality, to reduce the freedoms of refugees is astounding. We have particular concerns that the Bill will criminalise those who come to the UK through irregular channels and without valid visas. This would effectively create a two-tier asylum system, dictated by the method individuals use to enter the country, with those who come via the refugee resettlement scheme deemed as ‘worthy’ and those who come through irregular routes ‘unworthy’.

This is worrying for several reasons, not least of all because those fleeing persecution are very rarely in the position to use legal means of travel. The majority of those who claim asylum in the UK come through irregular routes, as their pressing concern is escaping in whatever way and using whatever means they can. To put this into context, the Scottish Refugee Council have raised concerns that if this Bill becomes law, ‘up to 21,600 people that the UK would accept as refugees today, could be turned away each year’. Moreover, as the UN Refugee Agency has pointed out - by rejecting, penalising and even criminalising the vast majority of those seeking asylum in the UK - the Nationality and Borders Bill would be in breach of the UN Refugee Convention and would undermine ‘established international refugee protection rules and practices’.

Once the Bill is passed, those who enter the UK through irregular routes but do manage to get refugee status will only be offered this on a temporary basis, giving them very limited protections. Those granted refugee status after coming to the UK through irregular routes will need to have their status renewed every 30 months and they will have no recourse to public funds. Not only will this make it harder for those with temporary status to put down roots and create a new life for themselves, it will keep them in a state of constant vulnerability and at increased risk of destitution.

Aside from judging asylum claims based on the route taken by an individual (including children) to get to the UK, rather than considering the persecution faced by that individual, there are concerns that the Bill would persecute those who seek to save the lives of those who find themselves in trouble at sea. There are real worries that the Nationality and Borders Bill could lead to the criminalisation of individuals and organisations such as the RNLI, as rescuing those in sinking boats could be deemed as “assisting unlawful immigration”.

Join us in the pursuit of change.

We at SCM feel that it is fundamentally wrong that we, as a country, are planning on introducing a Bill that reduces the opportunities and worth of other people, determining their right to freedom from the method by which they travelled to the UK. We understand that there are legal and financial factors to people entering the country and that national security is extremely complicated, covert and invaluable to the safety of those living in Britain, but it is a safety we often take for granted and an owed luxury that not everyone experiences elsewhere in the world. People do not flee their homes for no reason. They do not take their children on the back of trucks or across treacherous seas for no reason. These acts are born out of desperation and fear; a fear that exceeds the risk they take to find a country which might keep them safe. Not only as a Christian charity but as a group of people horrified by the unfolding human rights issues in both other countries and our own, we feel obliged to introduce this long-term campaign in the pursuit of a justice which our own government seems unwilling to employ.

Taking action can come in many different forms, some small and some large, proud and loud. Regardless of the approach, action should be maintained and made sustainable for both us as a charity and for you as individuals. We will be here to guide you through the process. As said, don’t hesitate to get in touch with Lizzy or Alana if you have any questions or concerns. Our blogs will be weekly and you can book us for online or in-person workshops (on the topic(s) of your choice).

We hope you will join us for this long-term campaign. If you are as shocked by the ensuing Bill as we are and concerned for the rights and safety of refugees and asylum seekers, please, take action. It all starts with a single step; we’ll take it together, if you’d like.

Get in touch with our Project Workers: