John Denver - Sunshine on my Shoulders 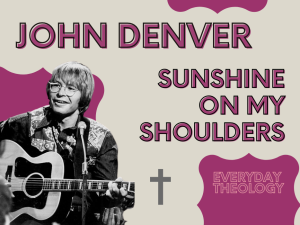 The song: John Denver- Sunshine On My Shoulder (1981 Japan) - YouTube

Revered as one of folk music’s best-known secrets, John Denver is well remembered for his love of Colorado, Annie and jet planes. What he is less known for is his life of activism, especially in the field of nature conservation. He raised millions of dollars’ worth of donations for the Aspen Camp School for the Deaf, collaborated with the Environmental Protection Agency in America, used his greatest hits album, Homegrown, to raise money for homelessness and founded the environmental charity Plant-It 2020 (originally Plant-It 2000), focusing on reforestation and afforestation.

In this penultimate Everyday Theology blog we’ll discuss the story of the Garden of Eden through the lens of ecological theology, our inspiration for which is one of Denver’s most famous songs, Sunshine on my Shoulders (1974), a love letter to the simple wonders of this world:

Sunshine on my shoulders makes me happy

Sunshine in my eyes can make me cry

Sunshine on the water looks so lovely

A man of few but powerful words, Denver paints his lyrics with the colours of light itself. The verb ‘transmogrify’ refers to when something or someone is changed in a surprising or magical way. In this song, the sun has transmogrified the land below it with a wonder that can only be described as God-given because “light is sweet, and it is pleasant for the eyes to see the sun” (Ecclesiastes 11:7 NRSV).

The Garden of Eden

The Garden of Eden is a remarkable place: it is the origin of earth and the birthplace of humanity in both brilliance and disgrace. However, it is often used to justify dominion over nature.

John Denver’s song is a celebration of nature, honouring the simplicity of the sunshine and the power it has to transform the earth below it. Contrary to interpretations of the Bible regarding human dominion over nature, which often return to Genesis 2 and 3, the first human was put in the Garden of Eden ‘to till’ and ‘to keep’ it (Genesis 2:15). This implies “both lordship and servanthood” (3). The verb ‘bd’ in Hebrew translates to “serve”, denoting admiration; and ‘šmr’, “to keep”, connotes the “act of protection… not of possession” (3). There is frankly little in the passages to suggest dominion or plunder.

For example, in Genesis 1, creation begins with “the skies and the earth” (1:1)”. However, in Genesis 2 the language is reversed to “the earth and the heavens” (Genesis 2:4; 4). The second is “more human-centered… more anthropomorphic… like a picture from the earth looking up” (4). This is important because Eve must have contained the same divine authority as Adam; they are products of the same divine proposal, taken from the same rib and breath. In fact, to be “taken from” suggests “mutuality” (3). Thus, humans are one with the earth, mutual, formed from "the dust of the ground" (2:7). The anthropocentric nature of the story of Eden does not suggest dominion but a form of duality in which we are reflections of the earth from which we came.

For Jürgen Moltmann, creation is God Himself. “It cannot, therefore, be treated as disposable” (5). Yet people continue to act as though it is unlimited and our exploitation of nature’s resources sustainable. After the Fall, man is called ‘to labour’ on the earth but no longer to protect it (Genesis 3:23). However, humanity continues to “simply assume that humans are superior to animals by definition of being created in the image of God” (5). This notion is carried on from Genesis 1 into the Garden of Eden. Nevertheless, in the Gilgamesh Epics - a part of ancient Mesopotamian mythology which predates but shares crucial similarities with Genesis - clay is used to form a human “with flowing hair… and the strength and manner… of the animals” (6). He is described as “innocent Enkidu” (7) because, like the animals of Eden, he is without sin. “The righteous know the needs of their animals”, they protect and shelter them (Proverbs 12:10) because “humans have no advantage over the animals” (Ecclesiastes 3:19). Where we are made in the image of God, animals embody an innocence that we lost in the Garden of Eden. “All go to one place, all are from the dust, and all turn to dust again” (Ecclesiastes 3:20). No living creature is greater than another; all serve a purpose to each other that the other cannot complete. “From the rising of the sun to its setting, the name of the Lord is to be praised”; this is something that people cannot do when under the impression that we own His land (Psalm 113:3). Never should we take for granted the rising of the sun, or the rays of sunshine it pours over us and the rest of nature with whom we are ontologically combined.

Crucially, according to Matthew 5:45, God “makes His sun rise on the evil and on the good… the righteous and on the unrighteous”. He spreads light, and thus love, indiscriminately across all people and places. Much like the duality of the earth which shines on both nature and those who try to destroy it, people are more complicated than their surface shows. A complex collation of our experiences, we are dynamic and layered like the earth itself. Those who live justly and kindly are “like the sun rising on a cloudless morning, gleaming” (2 Samuel 4). In the Bible, light is representative of both God and goodness, the antithesis of the darkness which marked the universe before its creation, which the Lord chased out with sunshine, plants, animals and people.

Pointedly, while Denver never referred to himself as an addict, he did come to speak candidly about his use of LSD and cocaine, plus his multiple DUIs and flying bans would suggest he led a troubled life when the curtains fell on folk-filled concerts (though he was not under the influence the day of his death). He also admitted to an act of physical violence against his first wife during their divorce. Much like previous conversations we’ve had about Dietrich Bonhoeffer, acknowledging the bad things a person participated in during their life does not need to diminish the many wonderful things they did do. It is, however, an opportunity to learn from and reflect upon the nature of humanity and how we fit into nature itself.

In 1974, a Cash Box review described Denver’s song as “a good remedy for relaxation in these troubled times” (1). President Nixon was still in the midst of one of United States politics’ worst disgraces, the Watergate scandal, the Vietnam War was fast heading towards its twentieth anniversary and Iran’s controversial US supported and funded nuclear weapons program had begun development (2). The last two of these seventies events either triggered or may come to cause major environmental (and human) ruin.

Denver’s song - it’s simplistic lyrics about love and sunshine and love of the sunshine - is a gentle reminder to the disheartened and fearful that a moment of stillness in the greenness outside can transmogrify the earth into a place of positive duality - of both chaos and serenity - as the pastoral becomes immersed in sunlight over shoulders caked in sunscreen.

“You don’t need to feel sorry for me – but you DO need to accommodate me”: a provocation for Disability Pride Month
Lenny Kravitz - Are You Gonna Go My Way
Refugee Week: What is it, why do we celebrate it and why is it so important – especially this year?