Joy in Enough: Economics for People and Planet 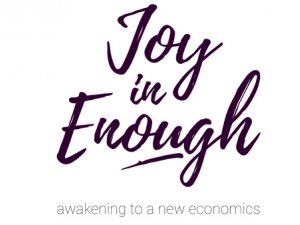 The Unfairness of an Economic System

“If you think you can do a thing or think you can’t do a thing, you’re right.”  So goes Henry Ford’s oft parroted quote.  It is particularly popular with Donald Trump, who has tweeted it on at least three separate occasions.  Of course it’s easy for someone like Donald Trump to say, starting out, as he says, with “a small loan of a million dollars”, but what if you are one of the many victims of an insidious ideology which keeps a few people obscenely wealthy, and a huge number living in the most abject penury?  What if you live a life entirely at the mercy of nature’s response to centuries of exploitation?  What if your life is one of destitution to the point of slavery and death?

One of the most frustrating things about being a Christian with an interest in politics and economics is that many of us lap up this kind of thinking, whilst failing utterly to engage with the structural causes of poverty and climate change.  Oh sure, we might buy the odd jar of Fairtrade coffee from our church stall, and that’s great, but all too often our engagement with such schemes comes out of our abundance, not out of our lack.  What this means is that we sympathise, we don’t empathise.  Fundamentally we don’t understand what it is really like to live in poverty, and because we don’t understand what it’s like to live in poverty, we think we can reverse poverty by buying a chocolate bar.

What am I saying here?  Well certainly not that we should stop buying Fairtrade.  The Fairtrade movement has its issues for sure, but it has made a considerable positive impact as well; simply not bothering to buy Fairtrade products anymore will hinder the search for solutions to the twin threats of poverty and climate change, not help it.  Nevertheless, with more than 300,000 people dying every year due to the effects of anthropogenic climate change, current efforts are far from enough.  I love the church deeply, but somewhere along the way, something changed.  Somewhere along the way, we became a church of the contented rather than a church of the poor.

Recently I received an invitation via SCM, to the Big Workshop day conference by Green Christian.  As you can imagine, upon reading that the ‘Joy in Enough’ campaign was to be launched there, my interest was instantly piqued.  My hopes were confirmed as I read their aims regarding fair and sustainable economics, so I signed on for the day.

Arriving at Sheffield’s impressive 1906 Grade II listed Victoria Hall Methodist Church, with its ample space and beautiful but unobtrusive décor, was a delight, and added to the sense of occasion.  From the front of the hall, the opening speaker made a promising start when referencing the first meeting between Stalin and Lenin, which took place in London, as cause for hope that “revolutionaries like us can change the world”.  Stalin in particular struck me as an odd choice to make such a point, but as a paid-up lefty, I figured I’d take it as a minor victory.  What became abundantly clear very quickly however, was that this group of people I had found myself sharing a day with, were indeed “revolutionaries”, seeking radical change to an economic system failing the most vulnerable, and failing the planet.  They were also Christians, deeply engaged with the gospel, and that brought me great hope.

The morning continued in this vein, with speakers talking to us both about some of the problems, such as the fact that “in fifty years time, there could be more plastic in the sea than fish”, but also of signs of hope.  This is crucial.  In the face of such overwhelming odds, we must not lose hope that change can and will happen.  If we lose hope, we are resigned to defeat from the outset.  One area in which we can find it is economics.  For decades now, prevailing economic opinion has considered the discipline a science.  This results in a cold, stubborn approach to economic policy, where blind allegiance to the ‘invisible hand’ of the market is for the good of all, where every vice we were taught as children is actually a virtue, where greed and self-interest cause wealth to ‘trickle-down’ to normal people.  Of course we know now that such fantasies are not only wrong, but dangerous, leading as they do, to greater inequality, and in turn to “worse health and social problems.”  This is where we can begin to see the seeds of hope germinating in modern economic thought.  A lot of modern economists now see their discipline as more of an art than a science. They see that people are relational creatures, both with each other and the planet, and that we “ignore the current economic model’s impact on the planet” at our peril.  What we actually need are “new measures of economic success” based not just on GDP, but on equality and environmental factors as well.

The Call for Christians

After a tasty sandwich lunch, we got straight into the afternoon session, this time splitting into groups to test-drive a new learning guide set to be rolled out to churches soon.  The format for this was not unlike courses such as Alpha, but of course the focus was on environmental and economic issues, with an implicit assumption that most doing the course would have some level of existing Christian commitment.  It worked well too.  The resources were slick and the group leaders appeared to know their role well.  Most importantly though, the content was eye-opening, giving a balanced view of the challenges, but equally presenting some of the positives as well.  This facilitated interesting group discussions, where people felt comfortable sharing stories and insights into their or their friends own experiences of poverty, as well as what practical steps could be taken by individuals and churches.  Finally, the afternoon was capped off with a short talk looking at the practicalities going forward. We considered who may be in the support base, and who may have “feelings” that run counter to our own.  How could we address with those people the limits to growth? How could we sell something that most people see as a negative?  The solution, it was decided, must be exciting; our beautiful, but finite world depends on it.

What seems clear to me, is that if we are going to solve these problems, the church needs to get over its fear of preaching politics from the pulpit.  We have the facts.  We know what we need to do, but more than anything, we know that ideologies centred around greed and individualism fly in the face of the gospel message.  We are in a desperate situation, but even now we still fear to address that which makes it so.  There is still hope, but the church needs to be brash and outspoken.  It needs to demand change, to condemn Capitalism, and certainly neoliberalism, for the evil it is, and take this threat head on.  The catholic social activist, Dorothy Day, recognised the value in the words of her fellow anarchist, Fyodor Dostoyevsky, from his novel The Brothers Karamazov: “Love in action is a harsh and dreadful thing compared to love in dreams.”  We would do well to meditate on those words, and as we do, perhaps we could remember also the words of one of Day’s contemporaries in the IWW trade union, the great songwriter Joe Hill, who before his execution for a murder he didn’t commit, implored his comrades “I die like a true blue rebel. Don’t waste any time mourning. Organize!”  The Joy in Enough campaign could do with the spirit of these great activists, so I ask you to do two things: offer your talents to this movement, and join a trade union, because socialism, Christianity, and the world all need each other.

This blog is adapted from the original blog Adam wrote for his own website here. Adam is a postgraduate student in Durham and an SCM member.

Tags:
Environment
Poverty
Climate Change
< Back to all blogs