Lenny Kravitz - Are You Gonna Go My Way 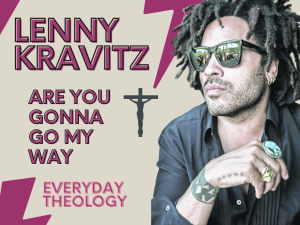 The song: Lenny Kravitz - Are You Gonna Go My Way (Radio 2 Live in Hyde Park) - YouTube

Just about the coolest near-60 year old there is, Lenny Kravitz has dominated the rock industry for nearly thirty years. Inspired by the heritage of both black and white musical traditions, much of which filled an eclectic childhood (1), over the decades his style has embedded itself in the sounds of hard rock, funk, psychedelic pop, folk, blues, jazz and reggae.

Kravitz still holds the record for most wins in Best Male Rock Vocal Performance at the Grammy’s as well as most consecutive wins by a male artist in any category. His breakthrough single in 1993 for which he did not win this competitive award is the one we’ll be discussing in this Everyday Theology blog, focusing on themes of salvation and justification. Though it’s not the most theologically obvious song in his anthology, Kravitz sings about the coming of a messianic figure who has just one question to ask the people he meets:

The Theology of Justification

Within Christianity, ‘justification’ refers to God’s righteous act of washing away sin, guilt and condemnation. This allows the soul of a human to enter Heaven. For hundreds of years, however, theologians have debated whether you must believe in Christ for this process of justification to take place. As such, the ‘way’ of Jesus has become blockaded by dogmatic disagreement and the nature of salvation examined through the peculiar customs of arguing about something with no right answer – not one we’ve been definitively given anyway!

Sola fide, which is Latin, refers to ‘justification by faith alone’. It is often supported by the epistles of Paul such as his statement that “a person is justified not by the works of the law but through the faith of Jesus Christ” (Galatians 2:16 NRSV). While belief in sola fide can be believed by anyone, it is typically associated with Calvinism, Lutheranism and Reformed Protestantism. Martin Luther greatly emphasised this theology in his Ninety-five Theses of 1517 in which he criticised the Catholic Church’s use of Indulgences (which refers to “a “remission before God” - the act of repealing sins already forgiven through "temporal punishment" - of which there are many misconceptions (4)). Luther criticised the belief that indulgences could be used by people to determine their own salvation (which is one of his misconceptions). Instead, Luther taught his followers that salvation is a gift of God’s grace attainable only to those who believe in Him (2). This form of justification relies solely on belief and is totally uninfluenced by a human being’s character and actions. So, in theory, a ‘bad’ person who believes in Christ will go to Heaven, while a ‘good’ person who doesn’t won’t.

Contrastingly, many Christians believe that salvation is achieved through a combination of faith and action. Others believe that God’s grace will be used to justify people on the basis of good works alone. This form of justification is more readily linked to Catholicism, Orthodoxy and some forms of Protestantism. The theology of ‘justification through good works’ is especially prominent in the book of James which states that “a person is justified by works and not by faith alone” (James 2:24) - an almost word-for-word divergence of the statement from Galatians. It presses people to consider how their actions now will affect them in the future. The most common argument made in favour of ‘justification through good works’ is also presented in the book of James: “you believe that God is one; you do well. Even the demons believe—and shudder” (2:19). We are not in a position to decide who is worthy to walk through the pearly gates, though it can be easy to think that some are more worthy than others... for example, El Chapo is practicing Christian.

To go the way of Christ, must you first believe in him?

Or, is salvation a matter merely of morality?

Kravitz alludes to the general theology of justification with his, if I might say so myself, poetic expression of deep thinking: “we’ve got to hug and rub-a-dub”. Not unlike the idealistic philosophy of sixties hippies in which love for one another will heal the world, Kravitz’s messianic narrator is calling for pure displays of affection. “Rub-a-dub” initially appears irrelevant, a product only of poor rhyming skills. Nonetheless, placed within the context of justification, in which God cleanses and cleans the soul, these humorous lyrics take on a profound theological meaning.

The Christian Eschatology of Parousia

Eschatology is the Greek word for ‘last things’. It can be used to discuss anything from the end of an individual’s life to the end of earth itself. Also a word deriving from ancient Greek, Parousia refers to the second-coming of Christ which is a form of eschatological theology. Though a highly debated topic, one that is prophesied in the Bible (1 Thessalonians 4:16), the Parousia of Christ will be the “final act of God that is to occur when human history has reached its divinely determined goal” (3).

Importantly, Christ’s final words according to the book of John were “it is finished” (19:30). This is a rather stark contrast to Kravitz's messianic figure who declares “I won’t leave until I’m done”. Christ is referring to the end of his earthly life and incarnation, Kravitz on the other hand appears to be singing from the point of view of the returned Christ who was “born long ago”, died, rose, ascended into Heaven but has now returned to earth to finish something new. He calls to us to follow him. “I have come to save the day”, Kravitz exclaims; he won’t leave until you go his way for the final judgment of humanity, for which we won’t be prepared until we “engage and rearrange and turn this planet back to one”, he claims.

On his back Kravitz has a tattoo reading “my heart belongs to Jesus Christ”. He also became voluntarily celibate for over half a decade as a result of this sense of belonging. Though he has written many songs throughout his career centred around his diverse upbring, spirituality and religious hybridity, there is something unusual about this classic rock single. As to whether Kravitz is singing to people about justification on the basis of their belief or calling individuals to seek a morality that is rooted in Christian ethics (even if they do not formally recognise it in that way) is unclear. Nevertheless, what is clear is that to whoever he is to singing he is not asking…

The song’s title, ‘Are You Gonna Go My Way’, is never written with a question mark.

Kravitz's song is a direct call to people to “dance and be in love” rather than “kill each other” and “always cry” because the music on the dancefloor isn’t playing. Sometimes you must make your own music, dance your own way and love all the people of the world like sixties hippies even when it’s hard to. “Faith, hope, and love remains” despite humanity’s many shortcomings (1 Corinthians 13:13). “The greatest of these is love” because it unites us even when we feel no faith and see no hope (1 Corinthians 13:13). Love is the evergreen. Love is the ’way’, whatever the theology.

John Denver - Sunshine on my Shoulders
“You don’t need to feel sorry for me – but you DO need to accommodate me”: a provocation for Disability Pride Month
Refugee Week: What is it, why do we celebrate it and why is it so important – especially this year?