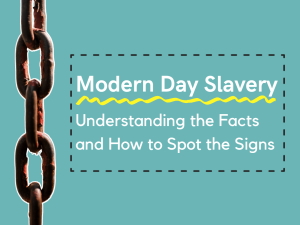 Last week, on the 25th March, the World marked the International Day of Remembrance of the Victims of Slavery and the Transatlantic Slave Trade. This day is designed to honour and remember those who suffered and died at the hands of the transatlantic slave trade system. However, it is also a good opportunity to consider the issue of slavery today. While it might be easy to consider slavery a thing of the past, it is estimated that 40.3 million people are the victims of modern-day slavery, or, to put this another way, it is thought there are ‘5.4 victims of modern slavery for every 1,000 people in the world’[i].

Modern-day slavery is a problem in all regions of the UK, and while the exact numbers of victims is unknown, the authorities classified over 10,000 people as potential victims in 2019[ii]. Yet despite the prevalence of the problem, the victims remain largely hidden. However, this does not mean it is impossible to stop instances of modern-day slavery occurring. Being able to spot and understand the subtle signs that someone may be the victim of slavery is paramount in helping to put an end to this horrific practice. Knowledge is power. As such, we’ve compiled this guide on how to understand and spot the signs that someone is the victim of slavery, and what you should do in those instances when you suspect this to be the case.

How can we spot the signs of modern-day slavery?

Firstly, it is important to recognise that anyone can be the victim of modern day slavery. It impacts upon all genders, ages and ethnicities. While many of the victims in the UK have been trafficked from countries in eastern Europe, South-East Asia and Africa, the victims may also be British nationals who are struggling financially and are ‘vulnerable to the lure of well-paid work complete with decent accommodation’[iii], or children or other vulnerable people who’ve been groomed.

Forced labour is the most prevalent form of slavery in the UK, ‘fueled by a drive for cheap products and services, with little regard for the people behind them’[iv]. The victims of modern-day slavery may take on different roles and be present in a number of industries. This includes, but is not limited to:

While the signs and causes of modern-day slavery can be quite diverse, there are some common signs that can help you identify when it is occurring. In particular, it is recommended that you look out for the following:

What to do if you are concerned someone is the victims of slavery?

If you suspect that someone is the victim of modern-day slavery, or if you have any concerns, then Anti-Slavery International and the Citizens Advice Bureau suggests several ways you can take action, including:

While modern-day slavery is a diverse and largely a hidden problem in the UK, it is not completely unstoppable. We believe in the importance of striving for a better world, and sometimes to make that happen we only have to open our eyes and look at the people and the world around us in a slightly different light. Together we can help to put an end to modern-day slavery and to liberate its victims, we just need to look that little bit closer and be willing to act if we notice anything suspicious.