More in Common? Culture wars, Populism and the Prime Minister 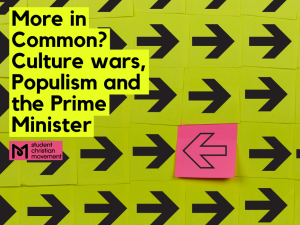 In her maiden speech to Parliament, the Labour MP for Batley and Spen Jo Cox said, “we are far more united and have far more in common with each other than that which divides us.” Just a year later, she fell victim to the very worst display of division and extremism thinkable. Jo Cox was murdered in June 2016 by a far-right terrorist as she was about to hold a drop-in clinic for her constituents. Despite this, the foundation set up in her name continues to campaign for the, “fairer, kinder and more tolerant world” that Cox believed in, and a good thing too. It’s certain she would be proud of their efforts.

As far as Jo Cox’s legacy asks us to reflect on what we do have in common, a sense of division and discord seems to colour the times we live in. In the last decade, Britain has carried out two incredibly divisive referenda - on Scottish independence and the European Union - which have returned close results and sowed confrontation and disagreement into families and friendships. In 2020, the Labour Party was reprimanded by the EHRC over its handling of reports of antisemitism, while in the Conservative Party allegations of islamophobia continue to be made. If the latter point ever seemed disputable: the Tory leader and Prime Minister himself compared women wearing burkas to, “letter boxes,” and, “bank robbers.” The old electoral playbook lies in tatters, and constituencies which once reliably turned out Labour MPs have fallen under the spell of Boris Johnson’s divisive, populist politics. In Northern Ireland, older legacies of colonialism and the newer legacy of Brexit are proving a toxic mix, threatening the peace process which has, for the most part, put an end to fighting on the island of Ireland. The list, sadly, does go on.

With all this considered, you can imagine it was to my great surprise when I read the following New Statesman headline back in April: Exclusive poll reveals 61 per cent of Tories and Leavers think most white people have racial bias. And it isn’t just on the subject of race that these types of trends were found. The YouGov poll for the Global Future think-tank also found that the vast majority of Britons (78%) recognise that their country has ‘done damage in the world’. On social justice issues, 80% of us overall find these to be important. In terms of immigration, another divisive issue, there is sadly a small majority who think that controls need to be tightened - but again, those who think immigration should be halted completely make up a tiny 4% of respondents. Simply put, on the kinds of issues on which the country seems most divided, we actually might agree. Isn’t that an incredible thought?

So, why does this not feel as though it is true? Well, the events I listed at the start of the blog post certainly haven’t helped. But, I’m going to argue that the main culprit for this feeling of division is the current Government, and the right-wing press which sends its cynical culture-war politics to the print each day. See, it is abundantly clear that this is an administration out of ideas - the recent Queen’s speech contained almost nothing new or imaginative. So, it suits the Conservatives very well to dither and distract by ‘stoking the culture-wars’, to drive divisions between people and to eek out the "Vote Leave" sentiment which helped to win its majority but is now paling into insignificance. While the cost of living skyrockets, the electorate are waking up each day to a new subset of society they’re supposed to be mad at; trans people and those people alleged to be “wokeing from home” are the latest examples. A non-binary person on a Zoom call: the horror! But, as this new polling suggests, Johnson’s Tories aren’t tapping into any great political sentiment or trend, they are making it up. And it doesn’t stick for long - the latest local election results are proof enough of that. Johnson dreams of an electorate terrified by wokeness, the tearing down of statues and the talking down of Britain. Instead, he got one that rejected his party and his politics to the tune of almost 400 council seats.

While the Tories’ portrayal of a divided, bitter Britain may simply be hot air, some in our society do indeed get burnt. The trans community come to mind particularly here. I am not for a minute suggesting that we be complacent, or stop speaking out about these ‘divisive’ issues. It is more important than ever that the right does not seize the narrative on such things. But we can derive hope from the fact the the majority of Britain seems moderate, understanding and ready to listen. The culture-wars are dangerous, but they are not a foregone conclusion, and they are certainly not representative of Britain today. And Jo Cox was right; as much as it pains the Government, we have far more in common than that which divides us.

Written by Tom Packer-Stucki. Tom is the Convenor of SCM's General Council and is a PhD student in Sociolinguistics at Queen Mary, University of London.

Ministry Experience Scheme
Unpacking ‘bigger is not always better’: bodies, food, and health on the Church Time's front page
Hope in the Midst of Climate Crisis