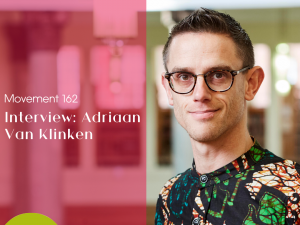 Adriaan was raised in the South West of the Netherlands, or as Adriaan puts it, ‘On a literal island.’ Reflecting on this culture Adriaan describes it as conservative, ‘Ultimately Dutch Reformed culture comes in ‘fifty shades of grey’. The one I grew up in was not the most conservative, but still very grey’. Clearly not a fan of this grey worship, Adriaan says, ‘In my teenage years, I discovered Evangelical Christianity. It seemed to be a lot happier and more exciting, so I grew into that.’ In fact, this change became influential on his career path, ‘I never became a radical fundamentalist Evangelical, but I went to all kinds of Evangelical Christian stuff. I think that kind of inspired my initial decision to do a degree in Religion and Social Work’. He admits that the ‘social work’ component is better translated to ‘pastoral work’, and explains, ‘My undergraduate degree was actually at a Christian University, an evangelical institution, and the degree was basically preparation for jobs in Christian Ministry and education.’ Adriaan never got ordained and found himself pursuing academia instead. That’s not to say he lost his interest in Christianity, especially Evangelical or charismatic forms of worship. Rather, that continues today and is reflected in his burgeoning Academic career.

Raised in a such a conservative culture, I ask how he came to realise his sexuality. Adriaan begins by setting the scene, ‘I was surprised that I always had a lot of female friends but that I was never attracted to them, or fell in love with them, or whatever. But I don’t think at that stage I ever explicitly wondered whether I was gay – just because being gay was not in the dictionary or part of the culture’. I’m struck by the ease with which Adriaan talks about this, although I might be projecting some of my own experiences with Evangelical Christianity. ‘It was only when I went to University to study in another city, leaving my parents’ house, the town and the island, that I was exposed to it’, says Adriaan, ‘it wasn’t even a very cosmopolitan city, especially at a Christian University. It was just a different environment.’

Although not a simple journey, Adriaan seems very at peace with it; we have a picture of a young man who is considering a ministerial career but is realising his own sexuality. For Adriaan it seems to stir a kind of self-assuredness – but not the arrogant kind, something that was already there. ‘While I was studying at this evangelical institution I still remember that I wrote an essay about homosexuality in the Bible in a very careful way – and if I were to read it today I would think: ‘Oh come on! Why so careful?’ But in my context and background it was kind of groundbreaking’. He seems to identify the turning point to around that stage, ‘I gave a presentation about the essay in class and half of them were upset… annoyed… frustrated… or whatever. So, for me, that was the beginning of an intellectual journey in which I started to negotiate and reconcile my sexuality and my faith.’