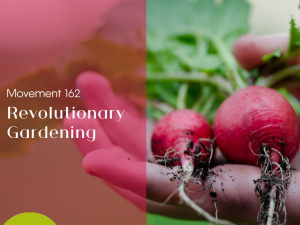 I believe that the ‘simple’ act of growing food can change the world. Our food systems are part of a global power structure, a structure that exploits and oppresses in the global south for the privilege of global northern consumption and the economic benefit of an incredibly small group. That oppression takes form in the guise of land grabs, environmental degradation, poor working conditions, unpaid labour, and so much more.

However, its is important to note that growing food is not some benevolent rescue mission performed by the powerful on behalf of the meek – absolutely not. In the Global North, we are all incredibly vulnerable and, on the most part, completely disconnected from our food supplies. We are beholden to a tiny minority of big agri-businesses, and their only concern is profit. Growing food is about mutual emancipation. We are at once complicit in the global food system, but also victims of it.

Growing food, then, is about an act of solidarity and interdependence. In the global south there are some fantastic movements that have emerged to resist domination in the name of food. Via Campesina are one such group that work internationally to articulate the rights of peasants to retain stewardship over the land they live on and to grow food for the needs of their community. It makes clear that the relationship they hold to the land is key to their identity and their humanity.

The eagle eyed among you will see that there are some pretty interesting theological and biblical themes that emerge connected to land, who we are as humans made in the image of God, stewardship, and not least issues of social justice and oppression. Throughout the bible there is a constant shadow cast over the Israelites; that shadow is the various empires that emerged throughout the course of history. There are numerous examples that we encounter through God’s story; the Babylonian, Egyptian, and then later the Roman empires. God’s story with the Israelites throughout is a consistent message of liberation for the oppressed and dominated. God promises the Israelites land, and freedom to live out God’s distinctive desire for the world. In the global south, corporate land grabs and environmental degradation are doing huge harm to people and planet, and in the global north a similar pattern of privatisation of space and subjectivity to food systems that we have little control over. I believe that guerrilla gardening provides us an opportunity to join in God’s work of an inclusive Kingdom by transforming our communal relationship to land and space for the common good.

For the full article, head to Movement issue 162.