Rach's Diary - pancakes in the snow 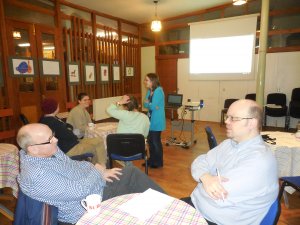 Last Thursday Storm Doris arrived in the UK. This meant that my plans for Ruth W (SCM's Faith in Action Worker) to visit SCM Manchester were scuppered as Ruth was stuck in Birmingham. We ended up cancelling the whole evening, but earlier in the day I did manage to get to Didsbury to meet with Jez from the Nazarene College to talk about how the Student Council and SCM can build community, so it wasn't a totally lost day. I also got to go home on a tram and a bus as the trains weren't running. This makes my February travel total - 59 trains, 4 trams, 6 buses and 3 journeys on the London Underground.

One of the main things I'm focusing on when I'm not on the road is my work plan for the next 18 months. It's been really interesting to sit and think about what has happened in the North West in the past six months and where we could be in the next year and a half. I know it's not all about numbers, but I've almost doubled the number of Link Churches in the North West and tripled the number of members so that is a good start! I've visited many chaplaincies, spoken to lots of students and am now just ten days away from the Called to be... Gathering in Manchester! There is still time to book your place for the student event or the Friends gathering, and you can do so here.

I was back on the rails yesterday to Liverpool. First I went to Liverpool Hope University's Chaplaincy to catch up with Lizzy, and made plans to visit again soon with my knitting needles for the new knit and natter group they have just started. Later I was joined by Ruth W, who did make it out of Birmingham this time to have a Big Conversation, hosted by St Bride's Church, to look at tackling poverty in the UK. I really enjoyed seeing the passion in people to make a difference for those around them.

Today has been a very snowy Shrove Tuesday at St Peter's House Chaplaincy where we have been feeding Manchester's staff and students free pancakes. It's been great to get their one word reviews of the pancakes - my favourite I think being 'belting!'

This week still has two more visits to Liverpool booked in as well as the pulling together of everything for Called to be... and that all important work plan!

If you are a student, a chaplain or a student worker or minister in a church in the North West and we haven't been in touch yet, please do email me.