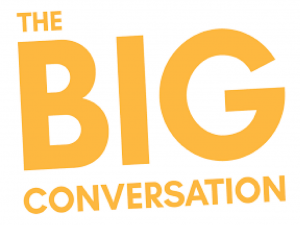 St Bride's Church, Liverpool hosted a Big Conversation event on Monday 27 February as part of the End Hunger UK campaign. The event began with a video clip which highlighted negative attitudes to people who were on benefits or used foodbanks. The group then discussed the root causes of poverty and hunger in the this country and came up with ideas for tackling the problem. The solutions ranged from 'community shops' (shops which sell items which are past their sell-by dates at discounted prices and build community at the same time) to putting an end to exploitative contracts.

We also talked about the poverty premium (how poor people pay more for electricity and far higher interest on loans) and how people spiral into terrible debt very quickly in a culture and capitalist system which exploits and abuses them on purpose. One person gave the example of someone he knew who paid over £1,000 on credit for a TV which should have cost £300! A couple of people spoke of their own personal experience of living on the edge of poverty and one person said that they had experienced how impersonal the 'system' can be, for example when you can't pay a fine: instead of helping you to pay in increments, the fine just keeps getting bigger.

Rounding off the conversation, we discussed next steps in the campaign and the policy asks we will be putting to the government. Everyone was interested in getting involved further in the campaign going forward. All the participants then wrote what they believe the government could do to end hunger on a paper plate.

Ruth Wilde, Faith in Action Project worker said 'It was really great to meet with such engaged and compassionate people at St Bride's. I hope that the problems and the solutions which we discussed will be heard by the government and that the campaign will be successful in both raising awareness of the issue of food poverty and pushing the government to make changes in policy. Even small things could make a massive difference to people's lives.'

Tags:
Faith in Action
End Hunger UK
< Back to all blogs