SCM Statement on The Nationality and Borders Bill 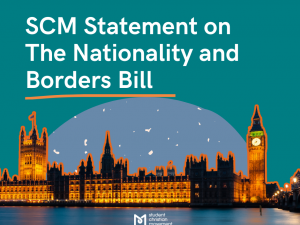 The Nationality and Borders Bill took a step closer to becoming law yesterday, with MPs rejecting a number of amendments that had been voted on by the House of Lords. Peers had voted to remove some of the harshest measures within the Bill, including the punishment of people who arrive in UK through irregular channels; the creation of a two-tier asylum system that treats people differently depending on how they arrive in the UK; the use of offshore processing facilities for those seeking asylum; and the right for the Government to strip people of their British citizenship without notice. Last night MPs voted to reinstate each of these measures.

At SCM we passionately believe that those seeking asylum should be treated with dignity, respect, compassion, and love. We are horrified at these latest developments, and that MPs have voted to reinstate measures which will punish those who seek safety on our shores. We believe this Bill is wrong, and we call for a more open and loving people-centred asylum system, with compassion and empathy at its core.

We belong to a religion that, we believe, is rooted in unconditional love for everyone. The Nationality and Borders Bill goes against everything we as Christians know to be true and good. At SCM we will continue to call for change, and we pray that you too will take action in pursuit of a justice that is not dictated by the borders we ourselves have created.