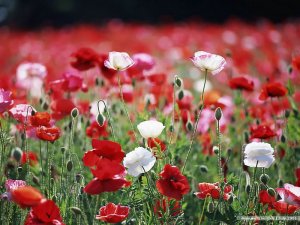 In the Yorkshire Post this week, Anglican priest G.P. Taylor launched an attack on what he called the “snowflake generation”, for wearing white poppies.

In recent weeks, I’ve spent lots of time reading hostile, and often abusive, messages. Some have been sent to me personally. Most have been sent to the organisation for which I work, the Peace Pledge Union (PPU).

And what is the PPU doing that is generating so much hatred? Distributing white poppies.

There are lots of social media posts describing white poppy wearers as “snowflakes”. A friend of mine suggested that I respond by saying, “So you think I’m unique and beautiful. Thank you.”

Presumably, “snowflake” has become an insult because of the image of fragility and weakness. Snowflakes contrast with the sort of person who sends us messages declaring that he won’t wear a white poppy because he is a “real man” (yes, some people really write that).

Real men, it seems, don’t acknowledge their fragility and weakness. This is a shame, because there is no strength in pretending to be invulnerable, no victory in claiming that violence will allow us to solve the world’s problems. As the apostle Paul wrote, “When I am weak, then I am strong”. Paul, it seems, was happy to be a snowflake.

As I write, students in Dundee are running a white poppy stall at their university. Yesterday, students at De Montfort University tweeted photos of their own white poppy stall. A number of SCM members are promoting white poppies at university, with the Progressive Christian Society at Essex University being among the most enthusiastic. They are also promoting our new online materials challenging militarism in higher education.

White poppies are about remembrance and peace. The struggle for peace continues beyond Remembrance Sunday. In a couple of weeks, some of these same student societies will be marking the International Week of Action Against the Militarisation of Youth, when people all over the world will challenge recruitment of both bodies and minds into the military machine. If we can help you to mark the week of action in your university or community, please drop us a line at mail@ppu.org.uk or call us on 020 7424 9444.

The “real men” who abuse us online believe that violence is the only alternative to passivity. The PPU rejects both options in favour of active nonviolence, through which people work with each other to achieve meaningful change. Because lots of snowflakes together can create an avalanche.

Symon Hill is Coordinator of the Peace Pledge Union and an SCM Friend.