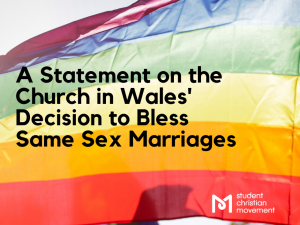 The Student Christian Movement celebrates the news that the Church in Wales has formally agreed to bless same-sex marriages. Yesterday, the Governing Body voted in favour of a bill allowing services of blessing to couples in same-sex marriages.

During yesterday’s proceedings, many spoke of the hurt faced by LGBTQ+ people at the hands of the Church. One member in particular spoke of the heartbreak he felt during prayers offered following his own marriage. He noted that whilst his family, his friends, his home, and even his rings could be blessed in church, his relationship with his husband was not seen as ‘worthy’ to be blessed in the same context.

The perseverance of LGBTQ+ members of the Church is admirable; however, it is disappointing that our LGBTQ+ siblings must fight so hard for their place in the institutions we love. We take courage from Jacob’s determination and bravery in the Bible, who said “I will not let you go, unless you bless me” (Gen 32:26, NRSV).

We understand that there are many valid and emotive reasons behind people’s convictions in this area. It is extremely important not to get caught up in ‘debates’ and ‘issues’, we must remember that we are discussing the real lives of beloved children of God. Whilst the offering of blessings for same-sex couples is a step in the right direction, we hope and pray that the Church in Wales will follow the example of the Methodist Conference in conducting same-sex marriages as well.

Many spoke yesterday of potential divisions in the Anglican Communion following the implementation of this bill. We pray that this step will encourage other Anglicans to move towards greater and full inclusion of LGBTQ+ people.

Tags:
LGBTQIA+
Inclusion
Churches
< Back to all blogs