Tallking about the Ark: An Interview with Jean Vanier 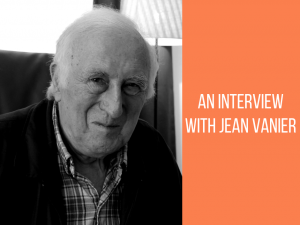 In 1964, Jean Vanier invited Raphael Simi and Phillipe Seux, two men with learning disabilities, to live with him in his home in Trosly-Breuil, near Paris. From the original small house, L'Arche (“The Ark”) grew to become an international federation of over 130 member communities in 36 countries, including nine in the UK. People with learning disabilities and volunteer “assistants” share their lives in active, intentional community living, workshops, educational programmes and other activities. Jean, now nearly 80, still takes an active part in the organisation. Jonathan visited him in Trosly-Breuil this December to talk about the birth of L’Arche, its place as a political entity and about what keeps him going when so many other people might have stopped working.

JS: The story of L’Arche and your story have been written about in a number of books but perhaps you could share one or two of the key moments in L’Arche’s development?

JV: Essentially, L’Arche has been discovery. I welcomed that fire, that feeling that was Small House and I did that from a Christian vision of welcoming the poor. It was something obvious for me to live with those who were [viewed by society as] broken. I had discovered how mistreated people with disabilities were. There was an element of putting things right.

But then it’s been a discovery. What have been the main moments, I’m not quite sure, but it’s been a gradual discovery that they are the ones who are healing me, and healing assistants. Because I had been in the navy, I knew how to command; I taught philosophy, I knew how to teach, more or less; but to start living with Raphael was not a question of commanding or teaching. It was a question of entering into a relationship. When you command or when you teach, you have power. When you start entering into a relationship, somewhere you're losing power. Entering into a communion, a relationship, and every relationship is beautiful but also wounding - if it’s a true relationship you can hurt people without wanting to hurt them, and they can hurt you without wanting to hurt. So it’s been a discovery that they are the ones that heal. And I am beginning to see in a very clear way that the danger of we human beings in creating walls around our hearts to protect ourselves, and these walls in a way are prejudices. We are prejudiced in respect to people of other religions or people without religion... somewhere there’s a need for all of us to know we’re right -not only that we’re right, but that we’re the best, that we’re an elite. There’s something in all of us and that’s something about our culture, about how my culture is the best culture, the British culture is the best, and the French think that they’re the best. Of course the Russians know that they are the best and you fall into all these things with football matches and rugby matches and God knows what. We have to prove something and we're in a culture of competition where we have to prove that. So when you start living with people with disabilities, we begin to touch our own brokenness and our own difficulties with accepting people as they are, and not as somebody to whom or over whom I have to lord or be superior and such.

So in point of fact what we’re discovering here is that living with people with disabilities, they bring down our mechanisms or defence and they bring us to enter into relationships which are very life-giving, to discover I am loved as I am. And so it brings to celebration — we're happy to be together. And so we’re moving from this system of competition to discovering the world of relationships, and relationships with the different. And particularly in this situation, particularly relations with people who are at the bottom of the social ladder, who could be seen as just of no value at all. And so it’s a rediscovery of a completely new vision.

From a Christian vision, I would say it’s reflecting Matthew 25, where Jesus says, “I was in prison and you visited me, I was naked and you clothed me” — I love the sound of it — “but whatever you did to the least of these, you did to me.” So, the discovery there that as we enter into relationships with people, there is a sort of healing. We’re growing in love. It can be also that we grow in faith, but that’s not what the text of Matthew 25 says. What it says is really that we will be judged through love. And love will grow as we welcome those who most of the time are despised: people in prison, people terribly poor, who are hungry, people who are naked. So for us it’s not just a question of doing good, but that relationship is entering into a personal relationship, one to one.

We discover people who are different, who frequently we think we are better than. Now, what we’re discovering also is that we have Muslim assistants, we have Hindu assistants, and they’re living the same experience. And Muslim assistants say to me, “Being in LArche, I feel closer to God and I’m becoming closer to my own religion.” So it’s not a question of competition, but it’s about everybody finding an interior conversion when they're growing in love. And we can only grow in love as we begin to touch what is not lovable in us.

So this is our community life. We just live together, have fun together, pray together, fight together and all the rest.

JS: People often idealise the notion of community, but L’Arche seems to be very focused on the realities of life. How do you manage this?

People with disabilities can be angry, upset — I mean, that’s the reality. And assistants come also with their hang-ups, with their need to prove and such. What I say is, L’Arche is a school where we learn to love. And that means going through bad spots, discovering who we are and all the rest. But at the same time, because it’s a school of love, and it’s a school then of forgiveness, we know also how to celebrate. To celebrate together, have fun together, and give thanks together because we’re human beings.

JS: What gives you hope?

JV: For me I can say it’s about living day-to-day. I'd like to add: and celebrating life.

What gives me hope is the assistants who come and who say to me, “I feel transformed.” It’s people with disabilities with whom I’m living and I see they too have been transformed. So the hope I have is the possibility of human beings to be transformed. And that transformation isn’t just a question of doing a bit of theology. It doesn’t mean taking one’s part and singing in liturgies. It’s about the discovery that we human beings, we become fulfilled as we enter into relationships of compassion. We enter into a relationship with people that we have considered no good, and who are lonely, and things then begin to change. Hope rises up because we see that human beings are made not to do beautiful things, but to live relationships, and live universal relationships. Charles de Foucauld talks about becoming a “universal brother,” and becoming a universal brother or sister through relationships with people who have been pushed down.

JS: Could you talk a bit about L’Arche’s relationship with the Church?

JV: There’s something to say that the church encourages us, but personally I get upset when I hear people saying, “You're doing good work.” I’m not interested in doing good work. What is interesting for me is a vision which is ecclesial, social, a way of relating. As I say, L’Arche is not a school of theology. It’s a school of relationships. And it’s not a school of prayer, though it leads to prayer. It can lead to theology. But it’s essentially a place where we’re touching our brokenness. So the heart of LArche, which I think is the heart of the Gospel, is humility. And we’re not there to tell people what to do. We’re there to enter into relationships with people and the church can very quickly fall into the trap of telling people what to do: what is right, what is wrong, in the various rules on morality, of liturgy and you can see a need sometimes for church to do that, but if that is done in such a way which is different to the washing of the feet, it can be seen as a quest for power.

JS: What do you think that Jesus’ model of leadership humbling himself has to say to politics?

JV: What one sees in politics is so much fighting! But to rise to the top means that we are people of extreme wisdom, who are not fighters. But most politicians have become fighters. Men of ambition. So the implications of LArche... we like to say, “Change the world, one heart at a time.” Which is a very small way of doing things. What I see happening now... I see in a certain number of towns, Lille and Paris. There, associations have started to create people who are off the streets and they see that it’s living together. There’s a movement for people with mental sickness in Besangon, and they’re creating these little homes, living together. So there’s a sort of movement, and L’Arche, I think, is seen as a model that healing comes from living together.

But it’s not just healing. What would be the situation in a place like Israel/Palestine? What I see is little groups of Palestinians meeting little groups of Jews. They can’t bring down the wall. They can’t. But they can get to discover their common humanity. The same thing I see with groups in Northern Ireland: the wall is maybe finished, but are people really coming together? People coming together, Protestants and Catholics, to discover their common humanity. And I see that happening also in Rwanda: Tutsi and Hutu women are meeting together to share.

So I think there’s a model that must move forward, that peace comes as we discover our common humanity. Peace does not come when I am imposing my beliefs on you, or that my culture is better than your culture. Everything has to begin with mutual trust, mutual understanding and therefore mutual growth. We grow together.

And there’s something new that’s happening, the whole question of the importance of the human person — this wasn’t around before the 1940s or 1950s. There is a movement now which will never permit at least visible slavery. There are still children who are taking up arms, there are still women coming from Asia or North Africa and into prostitution. There are Mafia organisations.

And there is no longer a real dialogue with children about what it means to be human.

So there’s something growing, which will take a number of years more.

JS: Many people would have given up a long time ago. What keeps you going?

JV: Well first of all, I’m in a place where I am happy and I feel loved. Something changed: I used to be more or less in charge. But now I sense that they feel responsible for me. Lulu will say, “You're looking tired, you must go to bed,” or “You haven’t taken your sleep after lunch.” There’s a mutuality because I’m growing older, because they can see me weaker, there’s a mutuality of trust, and of love and of looking after each other. And all of these people are people that have suffered a great deal, had no real family experience. There’s a sort of growth. We’re happy to be together. So L’Arche is a place of celebration. You couldn’t think of a better place.