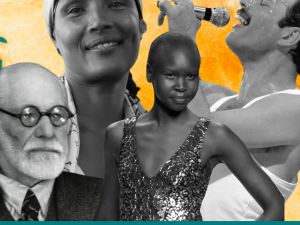 The Christmas period presents the perfect time to reflect on the importance of welcoming the stranger, the migrant, and the refugee. Whether it be Mary and Joseph seeking shelter in the stable, Jesus coming to earth, or the new family fleeing Herod and becoming refugees in Egypt, the nativity story is full of examples of God’s love for the displaced.
Coincidentally, International Migrants Day falls on the 18th December, at a time when the nativity story is at the forefront of many people’s thoughts. This year’s theme for the day is ‘Harnessing the Potential of Human Mobility’, with a focus on celebrating the contribution made by migrants, whose knowledge, skills and networks help to create stronger, more resilient communities. In honour of this theme, and reflecting on the importance of welcoming the stranger, our latest blog celebrates those who have come to the UK to escape violence and made positive contributions to our society. From Nobel Prize winners, to the designer of iconic British cars, our country has benefited immensely from those who have sought refuge here. While we have listed ten people here, there are many others who have made positive contributions to their communities and the world around them.
Lord Alfred Dubs is a Labour politician who has been a member of the House of Lords since 1994. He was also a Member of Parliament for Battersea South between 1979-1987 and was the CEO of the Refugee Council between 1988-1995.
Born in Prague in 1932, Dubs was among the 669, mainly Jewish, children saved from Nazi persecution by Nicholas Winton, who arranged their safe passage on the Kindertransport in 1939. This early experience of fleeing persecution and coming to the UK as a refugee has influenced both Dubs’ politics and wider career since.
Most recently he has been known for tabling what became known as ‘the Dubs amendment’ to the Immigration Act 2016, in response to the growing number of unaccompanied minors impacted by the European Migrant Crisis. This amendment ensured measures were put in place to protect lone refugee children who were trying to reach the UK. Although it passed parliament and became law, the amendment was removed from the Immigrant Act in February 2017. However, Dubs has continued to speak out on behalf of refugees, particularly unaccompanied children, and continues to table motions to ensure their protection.
Sigmund Freud was an Austrian neurologist and the founder of psychoanalysis, who lived most of his life in Austria, but spent the last year of his life in the UK.

Between the Back Door of the Bungalow and the Garden Gate: A Vocation Story
United in Christ: Ecumenism and the World Church
Proud to Be... A Fighter