These Are Our Bodies Too: Dobbs v. Jackson Women’s Health Organization Explained 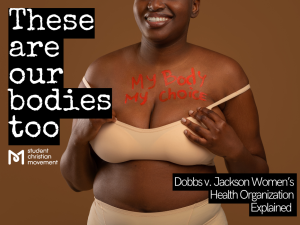 On 2nd May 2022, political news outlet Politico published a leaked draft ruling of the United States Supreme Court in the case of Dobbs v. Jackson Women’s Health Organization. If published officially by the Court, the ruling would strike down Roe v Wade and end federal constitutional protection of abortion rights. This is an unprecedented moment in US history, as according to Politico “no draft decision in the modern history of the court has been disclosed publicly while a case was still pending.” So, what’s at stake in this case and what could the consequences be for women’s rights in America?

What is Roe v. Wade?

Roe v. Wade was a 1970 US Supreme Court case in which a woman under the pseudonym Jane Roe challenged a Texas law criminalizing abortion except by a doctor’s orders to save the mother’s life. Roe claimed that the laws were unconstitutional as they abridged her right to personal privacy. The Court ruled in 1973 that the Texas laws did violate the right to privacy, enshrined in the Fourteenth Amendment of the constitution, that protects a person’s right to choose whether to have an abortion. The ruling meant that people have the right to choose an abortion without excessive government restriction.

The Supreme Court is currently hearing a case, Dobbs v. Jackson Women’s Health Organization, which claims that Mississippi’s Gestational Age Act banning all abortions after 15 weeks is unconstitutional. In a leaked first draft of the Court’s ruling, Justice Samuel Alito writes that Roe v Wade “must be overruled” and that the issue of abortion is to be dealt with by “the people’s elected representatives.” While this is only a first draft after which justices can and sometimes do change their votes, the Court’s majority of conservative justices means that this decision is likely to be officially handed down by the Court later this year.

What would be the consequences of overturning?

Overturning Roe v. Wade could also open the floodgates for other rulings to be struck down. Although Justice Alito says on page 62 of the document that “nothing in this opinion should be understood to cast doubt on precedents that do not concern abortion,” several other landmark rulings enshrining fundamental rights for many oppressed groups were argued on the basis of the right to privacy. If the Court’s ruling in Dobbs v. Jackson Women’s Health Organization says that the constitution does not endow this right, these key rulings could be reargued in the Court, among them:

Where does faith come into it all?

This is not a blog about the intricate ethics of abortion – and it is certainly not my place as someone without a uterus to wax lyrical about the subject. However, it shouldn’t be controversial to assert that we are all born with bodily autonomy and should be allowed to make decisions about what is best for our bodies and lives. Jesus says, “do not judge” (Matthew 7:1), so it follows that we must not judge others for the choices they make about their own bodies. As Brite Divinity School student Allen Junek says, “If I am expected to believe Christ when he says, “This is my Body,” then I am bound to believe women when they say, “These are our bodies too.””

In my blog about the UK-Rwanda Asylum Partnership Arrangement I mentioned the theological concept of accompaniment: the idea of showing solidarity with asylum seekers. I think the same concept can be applied to the issue of abortion. Whatever side of the debate you may be on, we are called to accompany on their journey those who choose an abortion in the spirit of compassion and respect, prioritizing deep listening and responding to the dignity of people with uteruses as fellow children of God.

The US Episcopal Church embodies this concept of accompaniment in its views towards abortion. They acknowledge that abortion is a form of healthcare and “an integral part of a woman’s struggle to assert her dignity and worth as a human being.” Since 1967 the Church has maintained its “unequivocal opposition to any legislation on the part of the national or state governments which would abridge or deny the right of individuals to reach informed decisions [about the termination of pregnancy] and to act upon them.” The Church also urges dioceses and congregations to “give necessary aid and support to all pregnant women” and stresses the importance of unconditional love. The position of the Episcopal Church shows that it is possible to both maintain that all life is sacred and recognize that women have bodily autonomy and should be supported in their decisions.

The US is set for a possibly tumultuous period in its history. The rolling back of abortion rights would be detrimental to women’s reproductive health and could have implications for other rights that have been won through the Supreme Court. Solidarity, organising, and resistance will be key in the months ahead to safeguard the concept of bodily autonomy and healthcare access in the United States.

You are wise beyond our knowing

You have gifted us with

You fill our lives with

experiences in which we

may freely use these gifts.

Before we were born, you knew us.

You know our deepest thoughts,

our wildest dreams and

When we were being shaped and formed

in the secrets of our mothers’ womb

You also knit together in us strong threads of

and set us free to live our lives

We are complex beings,

Give us the courage to

discern what is right

and what is good,

knowing that the two

may not always be the same.

Help us – and help us help others –

to respect all of life

especially the lives of women

who have been denied justice

fire our spirits, and

that justice and compassion

may always be our

companions on this journey

and we may know your peace.

A Prayer for the Journey toward Reproductive Justice

Written by Josh Mock. Josh is a trustee of SCM and stands on SCM's General Council as International Liaison. Josh is a BA Arabic and Persian student at SOAS, University of London, and is coming to the end of a year studying abroad in Jordan.

Barbieri Jr., William A. ‘The Migrant Imago: Migration and the Ethics of Human Dignity’. Christian Theology in the Age of Migration: Implications for World Christianit, edited by Peter C. Phan, Lexington Books, 2020.

‘Summary of General Convention Resolutions on Abortion and Women’s Reproductive Health’. The Episcopal Church, 17 May 2019, https://www.episcopalchurch.org/ogr/summary-of-general-convention-resolutions-on-abortion-and-womens-reproductive-health/.

Tags:
Abortion
< Back to all blogs

The UK-Rwanda Asylum Partnership Arrangement Explained
I Was a Stranger and You Invited Me In: The Nationality and Borders Bill Campaign