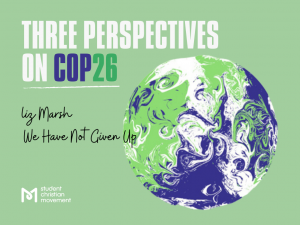 On a chilly November afternoon, I sat in my flat in Edinburgh and watched one of the final plenary sessions of COP26 as the conference prepared to draw to a close. A draft agreement had been reached, and delegates were discussing whether or not it would be passed. One by one delegates representing pacific and African nations – places at the front line of climate change – stood up and urged those present to accept the agreement. They could not go home empty handed to those whose lives and livelihoods they had come to fight for. But even as they did so, they issued stark warnings that the agreement reached in Glasgow was simply not good enough. Meanwhile, other delegates, those representing wealthy countries in the Global North made self-congratulatory speeches, describing the draft Glasgow Pact as a great step in the right direction.

As I watched throughout the afternoon, it was impossible not to notice this stark difference: for many of the world’s most vulnerable communities, climate change is quite simply a matter of life and death. The time for ‘good steps in the right direction’ has long since passed and already lives are being lost and livelihoods threatened in many climate-vulnerable places around the world. As someone who, along with other members of Young Christian Climate Network (YCCN), campaigned on issues of climate finance and climate justice for many months in the lead up to COP26, the outcome is deeply disappointing. While there are some important signs of progress contained within the Glasgow Pact, the fact remains that it is too little too late and devoid of any of the same sense of urgency that is so clearly felt by those on the front line of climate change.

As all this has been unfolding, I have begun a PhD. The focus of my work is the theology of hope in the context of the ecological crisis. I proposed the project – perhaps naively – with a certainty that hope could be found. But in the year since, as I have read more and become more deeply involved in climate activism, I am more cautious. I am not hopeless, not yet, but I am increasingly wary of the way that if care is not taken hope might be weaponised against the most vulnerable. Just as the cheapness of the claims of the US and EU delegations at COP26 that good progress had been made was exposed when set alongside the evident disappointment of their pacific and African counterparts, so too does cheap hope leave behind those that need it the most, the people that have the most to lose. Many of their voices were excluded from COP26 entirely, even while greenwashing was rife and corporate interests overrepresented.

It is imperative that theology do better than this and not repeat the same patterns of colonialism and misuse of power in which it has too often been complicit: a theology hope that does not include everyone is no hope at all. In light of the climate emergency, it feels impossible to pin our hopes on future guarantees. But we can follow theologian Catherine Keller’s encouragement to “stay with the struggle”:  we are not required to ignore our grief at what we are losing, nor our fear at what might lie ahead, but we must not be overcome by them entirely. Instead we can continue our struggle for justice, work alongside and in solidarity with the most marginalised members of society and believe that, against all rational expectation, a better future might just be possible.

If there is any good that has come out of COP26 then it is this. On Nov 6th 2021, I joined over 100,000 others marching through the streets of Glasgow to demand climate justice. The protest was the largest in Glasgow since the Stop the Iraq War march in 2003 and was just one of many that took place that day throughout the UK and around the world. Negotiations in Glasgow fell far short of achieving what was required, but the people had come out in force. After nearly two years of pandemic restrictions, the conference seems to have revitalised climate activism in the UK and organisations like YCCN are beginning to plan what we will do next. Almost all of us who campaigned around COP26 are fighting disappointment, burnout, even grief, but we have not given up.