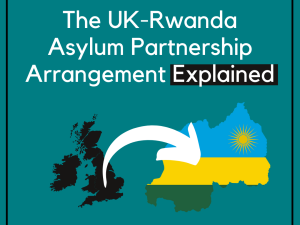 For the Lord your God is God of gods and Lord of lords, the great God, mighty and awesome, who is not partial and takes no bribe, who executes justice for the orphan and the widow, and who loves the strangers, providing them with food and clothing. You shall also love the stranger, for you were strangers in the land of Egypt.

On April 14 2022 the United Kingdom and Rwanda signed a deal called the Asylum Partnership Arrangement. Since then, the government has faced heavy criticism from human rights and migrant advocacy organisations. This blog will help you to understand what this agreement is and why it has attracted strong condemnation.

What is the agreement?

The agreement describes itself as “a mechanism for the relocation of asylum seekers whose claims are not being considered by the United Kingdom, to Rwanda, which will process their claims and settle or remove (as appropriate) individuals after their claim is decided.”1 Simply put, those who arrive in the UK “irregularly” or who arrived “irregularly” since January 1, 2022 (for example by crossing the English Channel), could be sent to Rwanda on a one-way ticket where their asylum claim will be processed. If Rwanda recognises their claim, they will be granted refugee status in Rwanda.2

The initial pilot scheme will focus on single men who entered the country via small boats and lorries. The government said that the first transfers of asylum seekers could begin in the next few weeks.3

What’s wrong with the agreement?

The government’s plans are most likely illegal under international law and will face many legal challenges before they can be implemented. According to UNHCR’s Assistant High Commissioner for Protection, Gillian Triggs, these plans “shift asylum responsibilities, evade international obligations, and are contrary to the letter and spirit of the Refugee Convention.”4

The 1951 Refugee Convention and the 1967 Protocol are two key legal documents that define the term ‘refugee’ and sets out refugee rights in addition to the legal obligations of states to protect them.5 As the Asylum Partnership Arrangement creates a two-tiered asylum system, whereby those deemed to have entered the country “irregularly” are sent to Rwanda while those who have arrived via an accepted route are processed in the UK, the agreement contravenes Article 3 of the Convention which states that the provisions in the convention must be applied “without discrimination as to race, religion or country of origin.”6 Such provisions include access to housing, employment, education, and social security. By refusing to process and assist those who enter via the channel, the UK is contravening these internationally ratified agreements.

It is also important to counteract the government’s narrative that those who cross the Channel in boats are “illegal immigrants” who cannot claim asylum. This is false. According to Lord Justice Edis, Mrs Justice May and Sir Nicholas Blake in a 2021 Court of Appeals Ruling,

as the law presently stands, an asylum seeker who merely attempts to arrive at the frontiers of the United Kingdom in order to make a claim is not entering or attempting to enter the country unlawfully. Even though an asylum seeker has no valid passport or identity document, or prior permission to enter the United Kingdom, this does not make his arrival at the port a breach of an immigration law.

Therefore, to treat migrants differently according to their method of entry is unlawful.

Rwanda is not a safe country for refugees

Rwanda is a country with significant human rights issues and the UK government has itself been a critic of human rights in Rwanda. Julian Braithewaite, director general for Europe at the Foreign, Commonwealth and Development Office, said in January 2021 that the UK is concerned by “continued restrictions to civil and political rights and media freedom” as well as calling for investigations into “allegations of extrajudicial killings, deaths in custody, enforced disappearances and torture”.8 Furthermore, many are concerned about human rights abuses against refugees specifically. In 2018 Rwandan security forces killed at least 12 Congolese refugees who protested a cut to food rations. A further 60 Congolese refugees were arrested on charges including rebellion and “spreading false information with intent to create a hostile international opinion against the Rwandan state.”9 This concerning track record begs the question of how the UK can consider Rwanda to be a safe place for refugees to settle.

There is particular concern for members of the LGBTQ+ community seeking asylum. Those fleeing a threat to their lives in one country could be sent to another country that is not safe for queer people. In 2021 the Rwandan authorities arbitrarily detained many gay and transgender people, sex workers, street children, and others in the months before a high-profile international conference. Those arrested were accused of “not representing Rwandan values.”10  Many queer Rwandans have been granted asylum in the UK, further bringing into question how the UK can view Rwanda as a safe country for refugees.

The UK is not the first country to try sending refugees to Rwanda. Israel established a similar scheme in 2015 when faced with an influx of refugees from Eritrea and Sudan.11 Refugees were offered a ticket to either Uganda or Rwanda, or deportation to their country of origin. The scheme failed: of the approximately 4,000 people deported by Israel to Rwanda and Uganda between 2014 and 2017, almost all are thought to have left the country soon after arrival, with many trying to return to Europe via people-smuggling routes.12 One can only assume that if a similar scheme is introduced in the UK, its chances of achieving its aims would be slim.

At a fundamental level, aside from the legal implications, this agreement violates the sacredness of each individual. Gillian Triggs says that "people fleeing war, conflict and persecution deserve compassion and empathy. They should not be traded like commodities and transferred abroad for processing," and her words reflect the Christian idea that all people are sacred bearers of God’s image and should be treated with dignity, compassion, and hospitality.13

As Christians we are called to “accompany” migrants and displaced persons. Unlike other models of humanitarian assistance that view migrants as service users, accompaniment emphasises “personally standing with and sharing the journey of migrants in a spirit of compassion and respect,” as well as prioritizing “deep listening, mutual witness, and joint action…responding to the dignity of migrants as fellow children of God.”14 When we shift our perspective towards migrants away from viewing them as simply victims in need of saving, or economic burdens as governments like to propagandise, and instead see them as siblings in need of our solidarity and accompaniment, we can build a migration system centred around compassion, mercy, and human dignity.

A Note on Racism, Inequality, and Double Standards

This government announcement comes amid Europe’s biggest migration crisis in decades amidst the war in Ukraine. But there is no talk of sending Ukrainian refugees to Rwanda. Instead, there are cash incentives for those willing to house families in need and a collective sense of moral duty towards Ukrainians fleeing war. This is great and should be praised. But why do we not feel the same way towards migrants arriving on boats? Why are we so willing to take in those fleeing Europe but not those fleeing conflicts in Yemen, Afghanistan, Somalia, and many other places? The difference is race, religion, and perceived differences in values. But as the UN Refugee Convention makes clear, we cannot distinguish between how we treat refugees based on their religion, ethnicity, or “acceptability.” We must quash these double standards and advocate for an asylum system that treats all in need equally and welcomes them without distinction. This work begins by examining our own biases.

The UK-Rwanda Asylum Partnership Arrangement is not only illegal, but cruel and deeply inhumane. We must demand more from our policymakers so that we live in a society that seeks not to exclude migrants but instead accompany them on their journey to safety and prosperity.

Convention relating to the Status of Refugees (1951) OHCHR. Available at: https://www.ohchr.org/en/instruments-mechanisms/instruments/convention-relating-status-refugees (Accessed: 16 April 2022).

Memorandum of Understanding between the government of the United Kingdom of Great Britain and Northern Ireland and the government of the Republic of Rwanda for the provision of an asylum partnership arrangement (no date) GOV.UK. Available at: https://www.gov.uk/government/publications/memorandum-of-understanding-mou-between-the-uk-and-rwanda/memorandum-of-understanding-between-the-government-of-the-united-kingdom-of-great-britain-and-northern-ireland-and-the-government-of-the-republic-of-r (Accessed: 16 April 2022).

Wood, P. (2022) ‘Why Rwanda plan might not work as offshore schemes by Australia, Israel and Denmark all failed’, inews.co.uk, 14 April. Available at: https://inews.co.uk/news/rwanda-scheme-might-not-work-offshore-asylum-schemes-failures-1577123 (Accessed: 16 April 2022).