Unpacking ‘bigger is not always better’: bodies, food, and health on the Church Time's front page 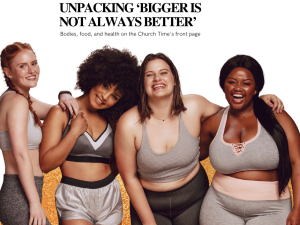 If you read the Church Times – or engage with ‘Church twitter’ or similar circles on social media – you may have noticed a recent article on obesity that sparked some heated discourse. The article may have been a well-intentioned attempt to engage the Church with issues of physical health and human flourishing, but its presentation on the Church Times front page left a lot to be desired.

The article itself is written by GP Richard Giles, who discusses the health risks associated with obesity and the possible role the Church can have in improving health outcomes. Though not without its flaws, Giles’ article is not so much the issue here - he acknowledges the complexity of eating and lifestyle habits, including the relationship between these and poverty and deprivation. What is problematic, I think, is the way this article is portrayed on the front of the Church Times.

The full front page from the 15 October issue predominantly consists of an image of an overweight man eating what appears to be a burger, next to the fast food van from which he presumably purchased it. Underneath, it is captioned ‘bigger is not always better’, followed by ‘why the Church needs to wake up to obesity’. The combined effect of the caption and image is, fundamentally, fat-shaming; a visual hook employing the worn-out binary of fat and thin, which sees the former as unequivocally bad and the latter as unequivocally good.

The language of ‘bigger is not always better’ continues to centre bodies as having some kind of moral value. This is a tired trope, imbuing varied levels of worthiness (and, conversely, stigma) depending on what someone’s body looks like – how it fits into these binaries of thin vs fat, apparent healthiness vs un-healthiness, and associations of these with perceived character tropes like hard-working vs lazy.

There is, unfortunately, no engagement with the topic of eating disorders in the article, despite the prominent role of disordered eating and mental health in many people’s relationships with food, bodies and physical health. Body image, and the complex relationships many individuals have with their own bodies, can themselves be triggers for disordered eating behaviours or other maladaptive coping mechanisms. A newspaper image which suggests that one type of body is ‘worse’ than another is not particularly helpful in this regard.

There are more helpful ways of engaging with food and our bodies that could be explored in a church context. Intuitive eating, for example, is a recent phenomenon which emphasises listening to the body’s own cues for when, what, and how much to eat. It is often put forward as an alternative to diet culture, and encourages emotional awareness, nutritional understanding, and respect of one’s own body and health. Another movement gaining traction is that of body neutrality. Body neutrality can be useful in de-emphasising appearance and reminding us that how we look doesn’t determine our value. Philosophies such as intuitive eating and body neutrality challenge the idea that bodies have moral value, and therefore counter current cultural trends in which certain bodies are valued over others.

This is not to say that health and wellbeing are insignificant. The Church’s engagement with issues of physical health, as well as poverty, mental health, inequality, and the ways these issues can intersect, can be a valuable practical demonstration of God’s love for people and their daily realities. But perhaps, in some circumstances, a perspective that doesn’t seek to centre someone’s body can help build a church culture in which all people are received with love. We often find that personal appearance can impart social currency and clout. But wouldn’t it be wonderful if, instead of perpetuating this, the church offered something different? So that, rather than walking into a church and feeling like a problem to be solved or a person to be fixed, anyone and everyone can be confident that they will be seen as a human being. Someone who will be, first and foremost, welcomed in as they are – a beloved child of God made in God’s image.

Written by Chrissie Thwaites. Chrissie Thwaites is a PhD candidate in religious studies at the University of Leeds, researching the impact of purity culture in the UK. Her research interests are practical theology and social inequality. Chrissie also blogs in her free time and is a Tearfund Young Theologian.

Ministry Experience Scheme
Hope in the Midst of Climate Crisis
There is evil, there is good, our actions matter, there will be justice