What the Eucharist Means to a Quaker 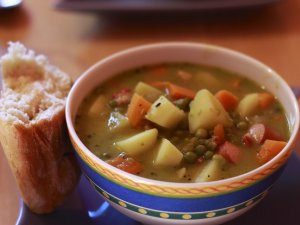 As far as I know, there are only two Christian traditions who officiallly don’t celebrate the Eucharist: the Salvation Army and the Society of Friends (Quakers). A fellow student at Queen’s Theological Foundation, where I study Theology, who is a ‘Salvationist’, told me that there are many different reasons for the Salvation Army not celebrating the Eucharist, but these are two important ones: they have always regarded women as equal in ministry (and sacraments at the time were only distributable by men); and they believe that throughout history the sacraments have had a divisive influence on the church, and differing beliefs about them have led to abuse and controversy.

I recently began worshipping with the Society of Friends, having been Anglican for many years. There are many things about the mystical and contemplative side of both Anglo-Catholicism and Quakerism that I find quite similar, but in terms of the focus on the Eucharist, they are very different indeed.

The Quakers have never celebrated the Eucharist or any sacraments. This is partly because they are a tradition which is historically teetotal, like Methodists. More importantly, it is because Quakers find that all ritual distracts and takes focus away from God. Also, Quakers believe that ministry is not only equal between men and women, but that it belongs to all people, not just a few ministers.

Brent Bill says that Quaker silence is in fact our version of the Eucharist. In his book ‘Holy Silence’, he says: ‘We believe that Christ comes in a physically present way in the same way that Catholics believe that when the host is elevated it becomes the literal body and blood of Jesus. It is not just some symbol…Friends feel that way about silence.’ Since I have been going to Quaker meeting for worship, I have increasingly felt the same way about it. Having thought I would miss the physical Eucharist, I have discovered it in a new and different form.

However, I have also discovered another incredibly powerful form of Eucharist, in the shape of an ecumenical house group called ‘peace meal’. It is based on the early church agape meals and on the Last Supper itself, where Jesus did not celebrate only with bread and wine, but with bread, wine and food. In our peace meal in Birmingham, up to 11 of us gather together to break bread and drink wine in the context of a shared meal, just like Jesus and the disciples would have done. We then share what we’ve been up to, what we need prayer for, and sing or read the Bible together.

There are so many ways in which Christ comes to us in the Eucharist, and there are so many different ways of experiencing and celebrating the Eucharist together. Quaker silence and our ‘peace meal’ are my own personal ways of connecting with the incredible mystery of God becoming present with us right here and now.

Tags:
Communion
Churches
< Back to all blogs