Who Would Jesus Bomb? When Durham JAM Met CCND 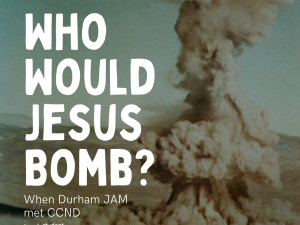 On Sunday 23rd January we were joined at JAM (Durham University’s Joint Anglican and Methodist Society) by Liddy from the Christian Campaign for Nuclear Disarmament (CCND). She delivered a workshop introducing us to CCND, covering the history of nuclear weapons and our response as Christians.

The session began with our usual meal of various (sometimes questionable) sandwiches, biscuits, and tea, for the duration of which Liddy had to endure our standard chaotic chat. Once we were all fed and a fresh pot of tea was made, it was time for the workshop to begin.

None of us knew much about nuclear weapons which made the introduction useful, and often shocking. Quantifying the nuclear capabilities of the US and Russia, as well as those of the UK, starkly illustrated the scale of the damage that could be caused by these weapons, should they ever be used. To think that there are people with the power to cause such unfathomable damage was a lot to take in.

The discussion moved on to why CCND opposes nuclear weapons, including the cost to the taxpayer and whether it’s ok to even threaten their use. We were faced with quite disarming questions, such as “who would Jesus bomb?”, to which we had no answer. Liddy shared some relevant quotes from the bible and further discussion ensued. Can you have nuclear capability and have good intentions? Can we really be peacemakers if we threaten to use these weapons, whether or not we intend to use them?

Responding to this session was challenging. Like many other Christians, we want to ‘beat our swords into ploughshares’ but don’t know how. It’s comforting to know that decisions that are in our control, such as who we bank with, can have a real impact. As students, we appreciated the advice to consider the ethical credentials of future employers and to tell our peers to do the same.

The session concluded with us all making an origami crane (to various degrees of success). This meditative activity helped us to reflect on what we’d learned and brought the workshop to a peaceful end. This really was a discussion to remember and we’re thankful to Liddy for sharing it with us in such a thoughtful way.

If you’d like to have Christian CND come to your student group then go to http://christiancnd.org.uk/workshops/ for more information.