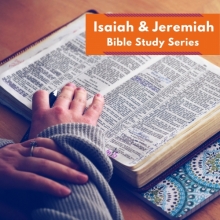 God of compassion, you are the consolation of all who hope in you. As we gather to seek you in your word, draw near and reveal yourself to us. We ask this through Christ our Lord, Amen.

The second part of the book of Isaiah, written around the time of the Babylonian exile, is often called the ‘book of the consolation of Israel’, because it describes YHWH’s saving action. The word we translate as ‘comfort’ or ‘console’ in this passage is the Hebrew root nhm. In one form (the piel) it means ‘to comfort’. It means to come alongside someone, to stand in solidarity with their predicament in such a way that their suffering is thereby eased. Very often it’s used in contexts that emphasise that only God’s comforting is effective. In another form (the pual), the verb means ‘to relent’, ‘to regret’ or ‘to change one’s mind’ – language applied to God as well as human beings. In these contexts ‘relent’ doesn’t just mean ‘think differently about’: it means a change of attitude that results in a concrete change of action.

What kind of comforting is going on? Most scholars understand this scene as set in the heavenly court, with God speaking to his attendants. In Isaiah 6, the prophet is told to ‘make [the people’s] ears dull, shut their eyes tight’, so that they do not understand or repent until the country lies in ruins. In 40.1, the prophet is given a new commission, to announce that God has relented, and the time of punishment has ended.

What kind of relenting is going on? The instruction to ‘comfort my people’ announces that God has relented of his earlier threats and punishment. Moreover, a string of promises suggests that things have changed: the people previously kept in the dark by God (6.9-11) will see the glory of the Lord (40.5), and hear him announced (40.9). In 35.8 the image of the highway is used to describe the people’s return from exile, but here the highway is for God’s arrival (40.3) to comfort his people. The image of YHWH as a tender shepherd (40.11) shows that he is comforting Israel in a way that concretely changes their predicament.

Who has changed their mind? The passage doesn’t suggest that God has changed his approach because Israel has repented or changed her behaviour. Rather, in the face of Israel’s persistent frailty (vv.6–7), God is the one who has changed his attitude. Rather than suggesting that God is impulsive or unpredictable, God’s change of mind shows that he is faithful to his steadfast love, which does not change (v.8).

These are important texts for the synoptic gospel writers, and we find echoes of them throughout their accounts of Jesus’ life and ministry, from ‘the voice of one crying in the wilderness’ right at the beginning of Mark (1.3), to the repeated allusions to the Suffering Servant in the passion narratives. Many Christian communities turn to the particular text we are exploring, Isa 40.1–11, at the beginning of Advent, because we understand the incarnation as God’s decisive comforting of his people.

Yet for all that, ‘consolation’ isn’t usually one of the words Christians reach for to describe God’s saving action: we typically pick up more Pauline language about salvation, redemption or reconciliation. So what does the concept add to our understanding of God’s redeeming work, particularly in the person of Jesus? In what way are Jesus’ healings and exorcisms a kind of ‘comforting’, in Isaiah’s sense? In what way does the incarnation show God ‘relenting’, in the sense we have explored – a change of mind or action that bears witness to God’s faithfulness to his deeper purposes?

God of mercy and peace, give us the grace to be bearers of your consolation.

Come near in comfort to all who long for you: to the poor, to the lonely, to those who thirst for justice and dignity, and in your goodness, count us among these your beloved people.

Written by Theodora Hawksley. She worked for the University of Edinburgh's Centre for Theology and Public Issues before leaving in 2014 to enter religious life in the Congregation of Jesus.