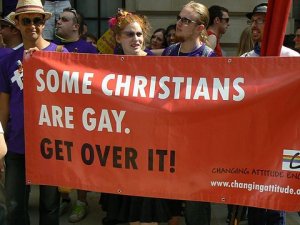 On the 1st October, Caitlin from General Council and I went along to a meeting of around 30 people from different organisations and churches across the country and across the spectrum of Christian traditions, from evangelical free church to Catholic and everything in between. The thing we all had in common is that we are all working in some way to improve the lives of LGBTQI+ Christians.

The event was organised by Tracey Byrne, CEO of the Lesbian and Gay Christian Movement (LGCM). She invited poet, reconciliation worker and leader of the Corymeela Community, Padraig O’Tuama, to lead us in a reflection on diversity within the world of Christian LGBTQI+-affirming work. He drew parallels with the work of Corrymeela and other peace and reconciliation groups in Northern Ireland, and told us about how easy it is to fall into the ‘divide and conquer’ trap which many who oppose our work would like to encourage us into. We must value our different offerings, traditions and the different pieces of work we’re doing rather than criticising one another. He said that he had to learn this the hard way when doing peace work in Northern Ireland.

Padraig’s talk reminded me of Jesus’ famous saying in Mark, where he says that ‘a house divided against itself… cannot stand’ (Mark 3:25). Granted, Jesus is refuting those who say he is working for the devil, so it is not an entirely appropriate passage of scripture in this case! However, there is something very true in that groups who want to work for a common good must not fight one another. If they do so, the work will fail.

Padraig led us in a Bible study on the very first part of Matthew, the genealogy of Jesus. He focussed on the five women mentioned in the genealogy - almost lost in a sea of men: Tamar, Rahab, Ruth, Bethsheba (not even mentioned by name) and Mary. He got us to think about the stories of these five remarkable women. He then asked us how their different approaches and their achievements might be relevant to our own work. Many important insights came out of the exercise: we said that their diverse approaches to problems showed that there is room for many different ways of working within LGBTQI+ campaigning and pastoral care; we also said that all of these women had to overcome great difficulty and great prejudice in their societies, just like LGBTQI+ people often do in the church.

Caitlin and I felt privileged to meet (and in some cases reconnect with) so many wonderful people who are doing so much fantastic work - from a representative of Diverse Church and people setting up their own LGBTQI+ groups in churches, to a trans person who has recently made a musical, now on tour, about the experience of being Queer and Christian. It reminded us of how much great energy there is out there for making a difference for all people who fall under the expansive LGBTQI+ umbrella. The reflection led by Padraig, and the chance to network and chat with a broad range of people, helped us to see the good in all sorts of approaches, and reminded us that Jesus called us to not only to be justice-seekers, but ‘peacemakers’ too (Matt 5:9).

When Will Black Lives Matter?
It's Time To Listen
Anti-Racism Resources