All May, None Must, Some Should: a Methodist View of Confession 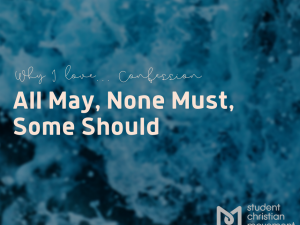 The Sacrament of Reconciliation, otherwise known as confession, is rarely associated with churches outside of Roman and Anglo- Catholicism and certainly not with my cosy corner of non-conformism! It is true to say that Methodism only recognises two sacraments officially, baptism and the Lord’s Supper. However, John Wesley started all his class meetings by asking members to confess their sins from the previous week, much to the alarm of many modern Methodists, and on page 423 (I’ve checked!) of our authorised worship book there is a liturgy for a private act of confession between a penitent and their minister.

There is a wonderful Anglican aphorism about confession, “all may, none must, some should,” which I think neatly sums up my theological outlook; it’s not for everyone. However, this Methodist is a very zealous convert to confession and perhaps, if you’re a little like me, it might comfort and challenge you on your faith journey as well. I’m an over-scrupulous Christian; I spent some time in a (non-Methodist) church where extreme anxiety over sin was encouraged and we were taught we deserved hell for even the smallest of transgressions. As a result, I struggle to identify sin and have a tendency to assume everything I do is wrong. Even after I admit fault, I find it hard to accept God’s forgiveness. Now my theology has been transformed, and I try to live my faith in a way that celebrates the innate dignity of people made in God’s image and really hear Christ’s words when He says, “rejoice with me, for I have found my sheep that was lost,” (Luke 15:6b). Despire this I still struggle with guilt, self-worth, and with accepting forgiveness, and confession has become a way to confront this with gentleness and compassion. Telling another person, in my case a minister who lives in a different district, those things I’m ashamed of, or feel guilt for, allows me in the first instance to work out which things are sins and which aren’t. Once I have more certainty about that, I am able to let go of those things which really are sins in the sight of God. Most powerfully of all, another person is able to reassure me that I am still loveable, even after hearing what I’ve done wrong. If they’re able to forgive me and love me, maybe I can believe that God does too.

Words have power, whether we write them, sign them, speak them or sing them. When we allow ourselves to share those things which cause us to feel shame and guilt, we remove them of their power and we trust that we are loveable and valuable regardless. We make the incredible statement that we are still worthy, that the things that make us feel ashamed don’t own us or define us. It’s a radical and empowering act that reflects the words of Romans 8:38-39; “For I am convinced that neither death, nor life, nor angels, nor rulers, nor things present, nor things to come, nor powers, nor height, nor depth, nor anything else in all creation, will be able to separate us from the love of God in Christ Jesus our Lord.”

At first, the idea of confession is a frightening one, we don’t live in a culture that encourages us to share negatives or admit fault, but it has the potential to be liberating and life-changing. Jesus promises that God will “exalt the humble,” (Luke 18:14b) and God will, exchanging our repentance for joy, freedom and dignity. Many of us have had experiences like mine, where theologies of sin have been used to oppress rather than transform, and we subsequently need to find healthier, more life-giving ways of confronting what we do wrong and how we relate to it. In doing so we seek to better answer God’s challenge in Deuteronomy 30:19; “I have set before you life and death, blessings and curses. Now choose life, so that you and your children may live.” In my journey to choosing life, I have also chosen confession, and found that in it God ministers to me in kindness and compassion and draws me closer to Godself, so that I can live life in all its fullness.

Written by Jessica Dalton. Jessica was Convenor of SCM’s GC from 2012-2013. She works for the Methodist Church, is an accredited Local Preacher, and is studying for a DTh in Practical Theology at Roehampton University. Her Twitter handle is @poohbearthetsum.