Am I my Neighbour’s Keeper? Reflections on the Death of a Dalit Student in India 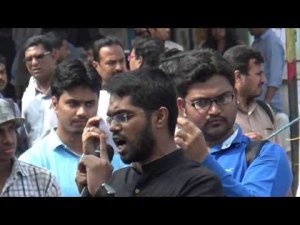 Rohit Vemula, a young Dalit PhD scholar in Science & Technology from Hyderabad Central University (HCU) was expelled along with four of his friends after a leader from the student wing of the ruling party made a complaint. The five students experienced social exclusion from university officials, their scholarships were discontinued and they were not allowed to enter into the hostels and administrative buildings.  Rohit and his friends lived in a tent outside the gate of the university which they named “Velivada” (Dalit Ghetto). Rohit killed himself on 17th January, 2016 in one of his friend’s rooms in the university, leaving a powerful letter behind, saying “The value of a man was reduced to his immediate identity and nearest possibility. To a number. To a vote. To a thing… My birth is my fatal accident.”

Following this incident, the Joint Action Committee (JAC) at HCU has been demanding justice for Rohit, and there have been several student protests across India and elsewhere. There is a ‘Student Spring’ which is having a ripple effect, challenging many students to fight the evil of caste and other forms of discrimination.

Does Rohit’s death have any message for those in the West?

As I shared the story of Rohit’s death with friends here in Manchester and across the UK, several friends said to me, ‘There are so many deaths happening across the globe. If a single soul died in Hyderabad, why should it matter to us?’ At St Peter’s House Chaplaincy we organised a ‘Solidarity Vigil for Rohit’ to try to answer some of those questions. Below are some thoughts which came out of that event:

1. We need to recognise the systemic, oppressive caste practices as discriminatory

Dear friends in the West, Rohit’s death was not an ordinary death. He dreamt of becoming a science writer like Carl Sagan, but exclusion, marginalisation, discrimination and institutional violence shattered his dreams and took away his life. Many of you will not understand the complexities of a systemic oppression called caste, where human beings are divided and discriminated against based on their descent and occupation. Rohit’s death was a wakeup call to us all to recognise that caste is a monster, at whose altar many people are sacrificed. Caste is practised across all religions and has permeated all structures and functions of Indian society. Some have asked if caste is practised in the West. The answer is a definite yes. We just need to look at the associations of the South Asian Diaspora in the West to see the proof: most are named after and based on caste identities.

2. We need to recognise forms of discrimination & institutional violence in our own context

3. We can participate in the Transnational Student Spring for Justice

The Joint Action Committee at HCU is demanding justice for Rohit. Our student societies are called to join with the students at HCU in solidarity for student justice, so that student issues can be addressed globally through networks which cut across territorial and other boundaries. Students in the West are encouraged to call on Indian Embassies in their respective countries and demand accountability for Rohit’s death and engage in international advocacy for justice to Rohit. Rohit’s death is a call for student activism. Speak to your local MPs about the death of Rohit so that they can pressure the Foreign Office to demand justice.

Re-reading Genesis 4: 1-16: The Blood of the Innocent Cries for Justice

Cain and Abel are brothers who are divided by their occupation: one is a tiller of land, and the other is a shepherd. Humankind, who are supposed to be living as brothers and sisters, fall prey to the mischievous devices of Manu (the architect of the caste system, as it was sanctioned in the religious text ‘Manusmriti’). Manu wants to classify communities based on their occupations, and thus the caste system come into being. Cain represents one caste and Abel another. When they both bring their offerings to God, Abel’s offering is accepted and Cain’s is not. Cain therefore embarks on a hate campaign against his brother and kills him. He can’t accept his defeat, which was a defeat for his whole community.

Cain today represents the dominant caste community, who cannot accept that their sibling community, the Dalits, are affirming their rights and proving themselves in centres of higher learning. The problem here is not that Cain’s offering is refused, but that Abel’s offering is accepted. Cain probably killed his brother Abel in the field and then tried to pretend that it was either a suicide or an accidental death. When God asks, ‘Where is your brother Abel?’ he replies, ‘I do not know; am I my brother’s keeper?’ This is the same kind of reply that we see these days, in the context of Rohit’s murder. The dominant communities say of the Dalit deaths, ‘I do not know what has happened; am I my brother’s keeper?’

In verse 10, God says: ‘What have you done? Listen: your brother’s blood is crying out to me from the ground.’ The dead body of Rohit is calling on God and all communities seeking justice. Rohit, like Abel, could not speak aloud to say that he was tortured and oppressed because of caste prejudices. He was murdered by the dominant forces, and now his very blood cries out to God.

What can Christians do?

Raj is a PhD student in Manchester. This blog is adapted from an original post in his personal blog.