America's Last Chance? A Reflection on the 2020 Election 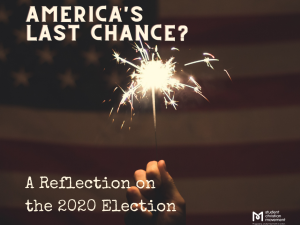 Growing up, I was fascinated by my American heritage. Proud to say that I wasn’t just British, I was constantly researching Washington State (where my father is from) and thinking about what it would be like to live there. I’ve twice had the privilege to visit my family there and some of my fondest memories are from my trips to the states: sitting in a restaurant looking over the Oregon coast at sunset with hummingbirds fluttering about; marvelling at all the planes in the Museum of Flight; being charmed by the hilarious sea otters at the Seattle Aquarium. I loved this part of my identity and all of the unique experiences it brought me.

Looking across the Pond now, I am sometimes ashamed to say that I am American. In just four years, it went from a nation with its first Black President to a nation whose leader has refused to condemn white supremacist groups. It is a nation where the word “freedom” is often twisted to mean that those with power and privilege should be allowed to do whatever they want, but many innocent Black lives are lost to police brutality each year. It is a nation where the existence of climate change can be a matter of opinion, rather than a real but stoppable consequence of human greed and negligence. It is a place where healthcare is a privilege, not a right. It is a place where religious freedom is not about who can practice their religion, but rather who can use their religion as an excuse to exclude others.

This election is a chance for Americans to reclaim their nation as a progressive and tolerant place - a nation that can address inequality, historic atrocities against minorities, and become a fairer place for all. But my fear is that not enough people know what is at stake in this vote. Not only is the country’s reputation on the line, but so are its democratic institutions. Donald Trump has refused to commit to a peaceful transfer of power and his nominee for the vacant Supreme Court seat refused to say whether presidents should commit to this. Donald Trump attacked the postal system and claimed that Democrats were using it to rig the election - a disproved claim, but one that damages public confidence in the system all the same. Donald Trump’s actions and words are more akin to a facist dictator than they are to the ‘Leader of the Free World.”

But this is precisely what many activists are saying: Trump’s actions are in line with how many dictatorships begin. Umair Haque, a survivor of an authoritarian regime, has been writing extensively on what he sees as America’s descent into authoritarianism. In his article titled “We Don’t Know How to Warn You Any Harder. America is Dying.”, he analyses many of the events over the past couple of months, including the August protesst in Kenosha in the aftermath of the police killing of Jacob Blake, at which a white supremacist killed two protestors and injured another. In the article Haque goes on to warn: “A second Trump term? It will involve all of the following. Shock troops on the streets. Disappearances becoming everyday events. Critics and dissidents being tortured in hidden jails. Expression and thought being monitored for any negative portrayal of the fascists. Hated minorities institutionally dehumanized and resegregated. It will involve levels of such horrific violence and brutality that Americans still cannot understand or grasp precisely because they have been lucky enough to have never yet personally experienced them.”

Americans are failing to grasp that this election is not just about politics - it is about democracy and people’s lives. I am angered by those on the left who refuse to vote for Biden as they deem him to be too right-leaning for their taste. Now is not a time for protest votes against the two party system. As Blake Mundell tweeted, “I’m voting for Biden because I’d rather fight to dismantle the two party system under a capitalist oligarchy than under a militarized fascist regime.” Voting Biden into office certainly won’t fix all of America’s problems, but it will ensure that people can criticise institutions and call out injustice without fear of being attacked by the state for doing so.

I hope there comes a day where once again I can take pride in my American heritage, knowing that I was one of the voters who ensured Trump was a one-term President. I hope there comes a day when I can be proud of my leaders and proud of the elected officials representing my people. But until then, I will continue to speak out against injustice and the destruction of Democracy, knowing that a better America is possible.

Written by SCM member Josh Mock. Josh is a second year BA Arabic and Persian Student at SAOS, as well as co-founder of SCM London and organiser of SCM's Theology Thursdays. You can find out more about him on his website.