Anglican by Upbringing, Baptist by Circumstance 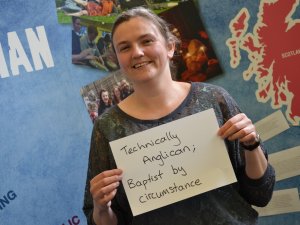 Like many people, I feel part of more than one denomination; for me it's the Church of England and the Baptist Church. I find many more similarities than differences between the two rich traditions. Both incorporate such a wide range of cultures and styles that there often appears to be more variation within denominations than across them.

My Journey Through Church

Growing up, my church experience consisted of Christmas and Easter at my grandmother's very small rural Anglican parish church and the occasional Brownie parade at the Methodist Church. Mostly I never had any idea what was going on or what I was meant to be doing!

When I was twelve years old, I started going to my parish church with a school friend. It was through Sunday school and that Anglican church down the road, with the games, the liturgies and the hymns, that I became a Christian. I also benefitted from an excellent Youth for Christ branch in my town. Along with teenagers from other churches, I was disciplined and encouraged in my faith. When I was in sixth form I chose to be confirmed, publicly making the promises for myself that my parents and godparents had made when I was christened.

Starting university, I tried a few different churches of several denominations. Our Christian Union was very good at linking up first year students with older students at a diverse range of churches. I joined a nearby parish church and, over three years, got involved in the church prayer group, young adults Bible study and the community centre. It was great to be involved in the city and get to know all sorts of people outside the student bubble. When I later moved to North West Wales, my search for a church was largely influenced by language as the majority of the population speaks Welsh, and I didn't. I was made welcome at a Baptist church that was full of people of various denominations.

One obvious difference between the Church of England and the Baptist Church is whether children are christened or adults baptised. I love going to adult baptisms, hearing testimonies, the symbolism and being part of the moment of commitment in front of family, friends and the church. I consider my confirmation the equivalent of adult baptism because I made the choice to follow Jesus, rather than baptism being only a ritual my parents did when I was too young to know.

Another visible difference is the variation in the liturgies that are used. Whereas the Church of England has set liturgies and seasons, the Baptist Church draws on a wide range of resources and styles. I appreciate having been brought up with Anglican liturgy because it is packed full of theology and phrases that stick in my mind. The symbolism and rhythm of the church year is something I am sadly ignorant about but I feel like it has a lot to offer. This reminds me how strange and incomprehensible church can be, even to Christians! We get so used to how we do things that we often forget that there may be people who are feeling baffled and unsure about church habits, let alone about what Christians believe.

Wherever possible, I think it’s important to go to a church within one’s local area, building local community and being able to invite friends and neighbours. Other advantages of going to church close to home is not having to get up so early and even being able to take a cup of tea along! For me, local church is about the people and their focus. The important things are whether it is welcoming, inclusive and kind, whether members love Jesus, are trying to act out their faith and are part of the community within which the church exists.  When I move, that’s what I’ll be looking to become part of, not a denomination or label.

It seems to me that it is best to belong to one church at a time to invest in relationships and get involved in what the church is doing; it’s not the denomination that counts, but the community.

Tags:
Churches
< Back to all blogs