Being a Place of Welcome 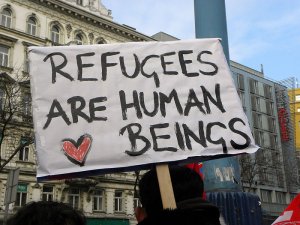 ‘The tiny victim of a human catastrophe’ said the front page of the Daily Mail last week, with a picture of the drowned Syrian boy Aylan Kurdi being carried out of the sea by a Turkish policeman. This headline came from the same paper that had for weeks been railing against incoming ‘migrants’,  dehumanising refugees, even calling them ‘swarms’.

The photo of poor Aylan seems to have finally swayed public opinion and the anti-refugee or anti-‘migrant’ rhetoric that was previously being used by our government and some of the press suddenly sounds like cruelty towards our fellow human beings. Why has it taken until now for us to realise that the people risking life-endangering journeys to Europe are just people like us?

We have a global consumer capitalist system that is so out of control and detached from the fundamental ethics of caring about anything or anyone that it is pretty much impossible to eat, pay taxes or have a bank account, without becoming implicated in something which seriously abuses people, animals, the environment, or all three.  All of our current problems are linked to the fact that we live in a world which revolves around greed and profit: the arms trade, perpetual war, the abuse of the earth, climate change, poverty, mass migration- the list goes on.

It is tempting, when you think about how hard it is to live ethically nowadays, to simply give up trying. But ‘The whole earth is filled with God’s glory’ (Isaiah 6.3) and, as Christians, we are called to care for this planet and for each other, so we must at least put our energy into lessening our negative impact and strengthening our positive impact on the world, as far as we can.

This generation has a vital role to play in changing hearts and minds and turning things around from crisis point. The literal meaning of the New Testament word metanoia, which we translate as ‘repentance’, is to ‘transform’ or ‘turn around’. We need to take that role seriously.

A good place to start in our bid to turn things around is with ourselves. In what way are we not seeing other people as made in the image of God? We need to examine our own prejudices every day. Intentionally using language which reflects the worth of other people is important, because our media and our government will often use words which dehumanise certain groups and make us feel disconnected from them. When we hear words such as ‘swarm’, ‘collateral damage’ and ‘scroungers’ used to describe fellow human beings, we need to challenge that language.

When it comes to the complex issues surrounding the refugee crisis, we also need to remember that much of the problem lies in the evils in which we are implicated as a nation. The selling of arms and the injustice of the global trade agreements, both of which our country supports, make people’s lives unliveable in other countries. We need to challenge the wrongs that we in the West are perpetuating, and we also need to welcome all strangers, because Jesus said ‘Whatever you did for the least of these you did for me’ (Matt.25:40).

To resist the evils of the arms trade, which destabilises the world and creates more refugees, join Emma at the protest against the DSEi Arms Fair in London on Saturday.

Tags:
Refugees
Arms Trade
< Back to all blogs