Between the Back Door of the Bungalow and the Garden Gate: A Vocation Story 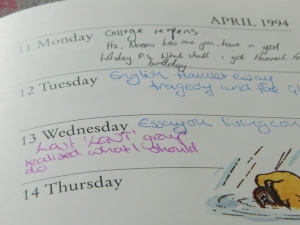 28 years ago today, on the 13th April, I received my calling to be a priest. I was 18 and preparing to do A levels before heading to university to study Law and History. I planned to be a lawyer, but God intervened. For a long time I wasn’t really aware of the date this happened on, but I realised a while back that I kept a sort of scrap book diary back then, so surely I’d have noted it somehow. So, I dug out my teenage diary and there it was, alongside notes about homework.

Now the date comes up every year on Facebook memories, and it always brings a lump to my throat. It’s the most momentous thing that ever happened to me, and an algorithm reminds me every year.

The story of that day is one I’ve told a million times over. All Anglican clergy are asked to repeat it again and again in the vocation process. Then in the retelling, the story becomes so much a part of us that it is on the tip of our tongues. For some people the story will be ‘I ran away and didn’t listen’ or ‘I don’t know how it really happened but here I am’ or ‘God didn’t tell me, but rather all the people around me’. Mine is both just as ordinary but also has some drama about it.

I went to a village church in Norfolk. The only other teenager there was my brother, and it was hard to make the transition into being an adult in the church. But that year I was permitted to join an adult lent group and along I went every Wednesday. The group met in an old lady’s bungalow; her name was Joyce. My Mum’s friend Beryl picked me and others up to drive us there each week. I’d love to say I remember the course materials, or even the subjects we discussed, but I don’t. We had a final ‘lent’ group after Easter because we’d missed a week at the start. So, on that last week I went and sat in Joyce’s lounge and presumably prayed and talked about God, I don’t remember the specifics. But when we left something extraordinary happened.

Somewhere between the back door of the bungalow and the garden gate I had what I can best describe as a realisation. All at once I knew that ‘God wanted me to be a vicar’. I wasn’t conversant with words like calling, vocation, deacon and priest. I’d never seen a woman in a dog collar. Looking back I realise the first women priests were about to be ordained at the time, but that was a world away from my Norfolk village life and I really don’t think I consciously knew. But this realisation was so powerful I just knew it is what God wanted of me. It was as if it had been there all along and the penny dropped. Everything fell into place and I knew for sure this was it. From that day to this I’ve never doubted it was what God was saying, and still says.

Yet all that said, I’ve actually never been a ‘vicar’. Because even if you have the showy story of a blinding flash, you still have to live the vocation you’ve been given. And it isn’t static. God called me to be a priest when I was 18, and he still does. But he kept calling me, and those other times his voice came other ways. I was called into chaplaincy by being inspired at the work of God in education, I was called to train and develop clergy by doing bits and pieces and growing into it before jumping full time, I was called to SCM by God boxing me in until I actually looked at the advert and I just fell in love with this movement.

But my calling to be a priest was as much about who God made me to be as what he wants me to do for him. When I stand behind the altar and raise my hands to pray the Eucharistic prayer, I am a round peg in a round hole, and my frustrations with the church, my sketchy track record as a disciple, everything from the last 28 years and the uncertainties of the future all melt away. I am in the place of my own belonging and the Lord is here.