Bonhoeffer: The Man Behind the Hero 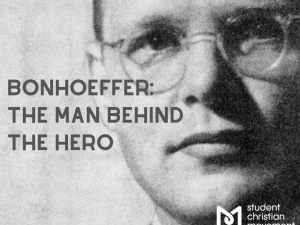 I find that the best part of In Our Time is the extra five minutes at the end of the podcast version, where guests can raise issues around the subject that there wasn’t time for in the main radio show. The episode on Dietrich Bonhoeffer which aired in September 2018 once again proved this to be the case! In the extra time Dr Stephen Plant, speaking of Bonhoeffer’s involvement in assassination plots against Hitler, points out that in the Third Reich there was not simply a binary choice between wholehearted support for the regime or getting involved in assassination plots to try and bring it down. Instead, Plant points out, Bonhoeffer made a conscious choice to join in with plans to assassinate Hitler. Plant concluded, “with hindsight I’m not sure he took the right decision”.

Plant’s comment was the culmination of one of the most nuanced discussions on Bonhoeffer to take place in recent years. Bonhoeffer’s experiences outside Germany after the rise of the establishment of the Third Reich were discussed frankly, including his temptation to stay far away from Germany. His vision of a post-National Socialist Germany was painted clearly as being a vision of another anti-democratic Germany with a different dictatorial leadership; a new Reich rather than a new Weimar Republic. Perhaps most symbolic of this nuance was the fact that Bonhoeffer’s death was never described as martyrdom in the discussion - instead we got a vivid depiction of the horror of his execution, resulting from his involvement in the failed 20th July plot to assassinate Hitler. At last we seem to be moving away from a gross oversimplification of Bonhoeffer, ignoring the complexities of his life and thoughts so as to create a clear martyr hero figure.

So, what is the image of Bonhoeffer we are left with when we approach his life in a more balanced way? We see a man confronted by a murderous and terrifying regime. A man who tried to flee, but found God calling him home to suffer with everyone else living under that regime. A man who decided that the only way forward for himself, his faith and his country was to kill that country’s leader. This Bonhoeffer is incredibly complex. He is not a simple martyr who died standing up for the Christian faith against the Nazis - instead he is a very real Christian who tried to apply his faith to the time he lived in. And in looking at the real Bonhoeffer we might come to the conclusion, as Plant did, that in some aspects he was wrong. As Christians, we may even make the personal call that we feel that in certain aspects Bonhoeffer failed to live up to the faith he professed. Was he right to try to kill someone, even if that person was Adolf Hitler? Is it ever right to murder? Is it sometimes necessary to commit evil acts to try and stop a greater evil? These are all questions Bonhoeffer wrestled with. We do him a disservice when we pretend that he had clear answers. Instead, by admitting that he tried to find answers in a time that demanded action, we can try and join Bonhoeffer in wrestling with these huge questions, and similar ones that may face us today.

Bonhoeffer was not a theologian granted the luxury of spending years in relative peace to try and work through his ideas in abstract. Instead he reacted to the world around him as it became increasingly chaotic and violent. We too seem to live in a time of chaos. A time which calls for action. By being true about Bonhoeffer, we can hope to find real inspiration from him. The questions he wrestled with are pertinent and do not have simple answers. We should look to Bonhoeffer not for answers, but for the very questions themselves, and see his attempts at how to respond to them. Is democracy necessary? What right does the Christian have to criticise the State? Can a Christian commit evil to stop another evil? These are questions for our time. Bonhoeffer did not have simple answers in his time, and so he cannot provide us with simple answers now. We need to try to respond, rather than rely on a saintly martyr in the past to tell us clearly what the right way forward is.

Written by SCM Member Dan Cruickshank. Dan is a PhD student at the University of Glasgow researching perceptions of the Third Reich in the Church of England.

Tags:
Bonhoeffer
< Back to all blogs