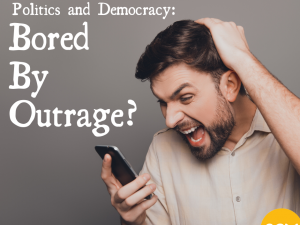 Everyone is familiar with the outrage that follows any media controversy. Piers Morgan says something “untoward” about gender, suddenly thousands of online activists are campaigning for his removal from television. Chic-Fil-A attempt to open a branch in Reading and they are run out of town by LGBT activists. Ann Widdecombe expresses the view that she wonders if science might produce an answer which will enable people to choose their sexuality. We are “all” aghast. Or at least, we are supposed to be.

I cannot be alone in thinking it's exhausting trying to keep up with everything we're supposed to be outraged about. Are there still topics upon which people have moderately held opinions, which are open to change and which they do not feel strongly about?

As much as there are many who are legitimately and rightfully outraged about injustice in the world, there are also those who look for any opportunity to 'rage just for the sake of it. This outrage, or faux-rage as I term it, has itself produced some very interesting backlash. People are now outraged that people are outraged in the first place!

For example, in the instance of the Chic-Fil-A branch being opened in Reading and consequently run out of town by people concerned about their anti-LGBT views, conservative activist Raheem Kasim posted to Facebook telling his followers “Don’t shop at The Oracle in Reading. They hate freedom.” I must be one of ten people who really doesn’t care either way - but that should be okay. It's okay to care, and it's okay to take a step back, too (though this is obviously a privileged position to be in as not everyone has the luxury of disengaging). Capitalists respond to consumer demand. The consumers, albeit perhaps a vocal minority, have decided that they’d rather not eat there. My argument would be as with gay marriage, if you don’t like gay marriage then don’t get married to someone of the same sex. Equally if you don’t like Chic-Fil-A, then don’t eat at Chic-Fil-A. Others disagree with me, and that's okay.

I do suspect, however, that most folk are exhausted by extreme faux-rage, be it liberal or conservative in nature. It can sometimes feel like we are all supposed to be angry all the time, but some of us are not even sure why we’re angry; we just are because the people on the other side of the spectrum think and say certain things. Personally, I’m Villanelle from Killing Eve levels of bored.

Do you have outrage fatigue? Is some outrage necessary in order to bring about change in the world? What do you get outraged about?

Rhys McKavanagh is a student in Salford.