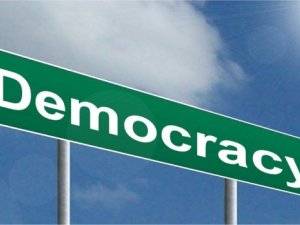 I’ll tell you a secret. I don’t believe in democracy.

What I mean is that I don’t believe in the type of narrowly-defined democracy that exists in this country and that we ‘export’ around the world: I don’t believe in representative democracy. It’s better than some other options obviously (tyrannical despotism comes to mind!) but I still don’t believe in it and I think there is a better way.

Although we are convinced that representative democracy is the only way for people to have a say, in practice we are seeing more and more decisions being made by elected governments when a majority of people disagree with them.

Maybe you remember the protests around tuition fees in 2010. Despite mass occupations of universities, the government still lifted the cap on tuition fees, allowing universities to charge higher, more crippling fees for going to university. How about the Greek protests against austerity recently, which culminated in the Greek people voting for an anti-austerity party? The outcome was more painful austerity imposed on Greece by the European Union. Ordinary citizens could not change the outcome.

People are feeling disenfranchised and powerless, even in ‘democratic’ Western Europe. In the UK, our democratic system is worse than many others at representation. Because of our failed ‘first past the post’ system, we currently have a government holding absolute power which won only 36.9% of the vote. The turnout was only 66%, so the government we currently have was effectively voted for by a tiny minority.

If you ask the 34% why they didn’t vote, the majority won’t say that it’s because they couldn’t be bothered to walk to the polling station. Most will say that it doesn’t make a difference. I have friends who don’t vote for that very reason! Helplessness and powerlessness is breeding apathy. There is a sense that whether we vote red or blue or something else, the result is always the same: we have no say in what happens next and we will be ruled by an out-of-touch elite. Jesus was suspicious and critical of the State because it can be violent in the way it sucks all power to itself and rules over a powerless majority.

So what’s the alternative? I think it’s bigger, broader and more participatory democracy. Examples of this include cooperatives (such as film co-ops and food co-ops), community organising (see Citizens UK), companies being owned by those who work for them instead of shareholders (see John Lewis), and participatory budgeting.

So, by all means go out and use your vote, but don’t just vote. Think about how you can take part in a better kind of democracy and help to grow real democracy, a democracy where everyone has a voice.