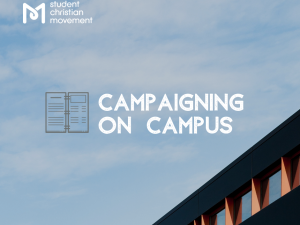 Campaigning on university campuses can be pretty daunting if you haven’t much experience. Even now, after over a year involved in Amnesty and SCM, I often find myself unsure how to approach a campaign. Sure, you can stand along a popular route and hand out information leaflets, but are you actually reaching people? When campaigning, you want to get people interested, even enthused, and reading text does not do that for a lot of students. So with that in mind, here are a couple of ideas which have seemed more successful in my experience:

Approach people directly to talk to them. While the average student may not want to take a leaflet, they are often willing to show some interest if you start talking to them. A small group of activists can rack up 100 signatures on a petition in an hour by actively walking up to people to ask for signatures, if that’s your aim. Alternatively, a whiteboard where you ask people to write a word associated with a certain topic (such as “home”) can open up discussion and be a powerful campaigning tool.

Do something attention-grabbing/artistic. The best campaign I’ve seen in this sense was a campaign to raise awareness about conflict in Palestine. Three people played dead on the floor, while a fourth read out a testimony from someone who had witnessed a shooting through a megaphone. This can be a really effective way of educating people. Photos and collages can also catch people’s eyes if you are campaigning from behind a stall.

Organise talks on a subject. This works especially well if you can find someone who sounds interesting to students. Lancaster University Amnesty’s most successful campaign last year came when we invited an ex-Bahraini MP to speak on statelessness – and the success came partly because he was an ex-Bahraini MP. Of course, with an event like this you will need to advertise it, which can be done on social media, by handing out leaflets, or perhaps by one of the two techniques above.

Campaigning is important, regardless of what you do, but one thing which often seems to be missing is a strategy tying it together. An isolated action is still worth doing, but you can achieve much more carrying out a campaign with a goal. As such, that should be a starting point: what do we want to achieve? Following that, maybe work out a few times you’re available to campaign – probably spread over an entire term – and plan how you can first raise awareness, and eventually bring people in who want to take action on the matter. If we can learn to do that, we can increase the effects of our activism by several times, and increase the profile of our own groups too.

Loving the Earth
Resolutions for a Better World
So Let's Speak