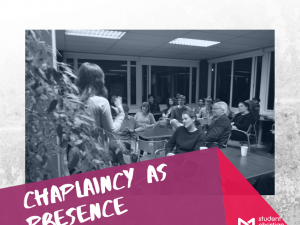 ‘I’m still discovering right up to this moment, that it is only by living completely in this world that one learns to have faith… That is what I call this-worldliness: living unreservedly in life’s duties, problems, successes, and failures, experiences and perplexities. In so doing, we throw ourselves completely into the arms of God’ - Dietrich Bonhoeffer, Letter to Eberhard Bethge, 18th July 1944

Chaplaincy is usually characterised as a Christian or religious presence in a secular institution. This idea of presence was one that I grew to understand during my time working in a university chaplaincy, and I think sums up what is unique about the space that chaplaincy fills.

In the recent study on chaplaincy in the UK, ‘Chaplains on Campus’, presence was a close runner up to religion and pastoral care in how chaplains viewed the aims of their roles. The religious element of running Christian or spiritual activities for students is perhaps the most obvious role of a chaplain, while the largest proportion of chaplains’ time in practice is dedicated to supporting students pastorally as part of a university’s student support or wellbeing service. But I think what chaplaincy captures which no other role can is the idea of being present on purpose.

Other student support services often seem distant and somewhat inaccessible, with waiting lists and online forms to fill in. Chaplains make a priority of being out and about on campus, approachable by anyone and everyone who fancy a chat. Ever tried to walk through campus with a chaplain? It takes twice as long as usual, because they’re constantly bumping into people and waving at familiar faces. This availability and approachability is such a blessing in an age when most are too busy to stop and talk, or stay in the confines of their allocated office.

I think there’s also a theological importance to the presence that characterises chaplaincy. As Christians, we believe in a God who chose to be present with us, in all the chaos of Earthly life. Bonhoeffer spent a lot of time while he was in prison reflecting on Christianity in ‘religionless’ spaces and societies, and the quote above shows how he valued being present in the secular, ‘real’ world as the only true way to discover faith.

I love that chaplaincy translates what often seems like inaccessible and lofty religious ways of life right into the heart of the secular institutions of our modern world, whether that’s a university, prison, hospital or shopping centre. People all around us are crying out for spiritual direction, and chaplains are points of contact for people who know that they’re lacking some kind of depth in life, but aren’t sure where to find it. We can all learn a lot about living out our faith from those who choose to live out their calling to ministry right in the heart of everyday life, and walk a unique and creative path of faith as a healing, prophetic, and welcoming presence in a secular world.

Tags:
Chaplaincy
Bonhoeffer
< Back to all blogs