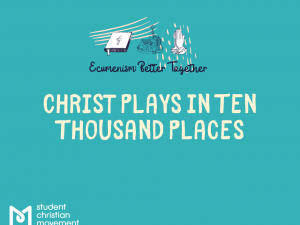 Well, I think the Protestant churches’ reluctance to think and talk about Mary has at least something to do with ingrained misogyny. I mean, a woman literally held God in her body. Surely that has a lot to say about female embodied-ness?

Declaring this to a close friend of mine – who is a devout Roman Catholic – I realised that pre-university me would have despaired. How could I possibly have ended up with such a high view of Mary as the God-bearer, the theotokos? Was this heresy? But, I told my friend, I feel such an affinity with this prophet who declared the overturning of oppressive systems: ‘he shall put down the mighty from their seat, and the rich he shall send empty away’. This radical, political, prophetic, first-century Palestinian woman had been neglected by my tradition, and I wanted to get to know her better.

In fact, I’ve met a lot of wonderful women through my theological studies, and most of them didn’t share my Baptist convictions. I’ve discovered Christ as Mother in the visions of Julian of Norwich; I’ve heard the Music of the Spheres in the ethereal songs of Hildegard of Bingen; and, I’ve found solidarity in times of desolation with Teresa of Avila. Falling in love with, learning from and praying with these fantastic Catholic women, I’ve realised that there is so much more to the Christian faith than just my Baptist bubble. So, I try to break out of that bubble as often as I can.

In the summer of 2017, I found myself at the Tantur Ecumenical Institute in Jerusalem for a kaleidoscopic month of ecclesiastical experiences that pulled me from my liberal, evangelical-ish, vaguely charismatic comfort zone. I worshipped in churches and chapels that spanned Roman and Syriac Catholic, Coptic, Syriac, Ethiopian, Greek and Russian Orthodox, Armenian Apostolic Lutheran, Presbyterian and Anglican traditions. And of course, ecumenism happened at the altar, when I saw Catholic brothers gladly accept the communion elements from a Presbyterian minister presiding in Bethlehem. Ecumenism happened when, at 6am each morning, incense billowed from all corners of the Church of the Holy Sepulchre, as six different denominations took turns in a carefully choreographed dance of sanctification, smoke swirling around the places of Jesus’ crucifixion, anointing and burial.

But ecumenism also happened when we drank wine, sang, and shared stories, overlooking Jerusalem from swing seats nestled amongst the olive groves on long, balmy July evenings. We didn’t hash out our differing views of baptism or priesthood, or debate whether the sacrament we’d shared together each morning had been legitimate. We talked about life, joy, suffering, and the challenges of faith and vocation. And, as we opened ourselves to one another, we celebrated those places where our paths wove together or diverged.

Back in Oxford, I often have a hard time convincing people that I really am a Baptist — and a Baptist minister in training, no less. On an ordinary week, I pray compline at an Anglo-Catholic chaplaincy, share in the Eucharist at Christ Church Cathedral, and sing in the choir in another Anglican college chapel, as well as preaching or leading services at my college and placement church, both of which are Baptist. Does this compromise my Baptist-ness? Well, I certainly don’t think so. My tradition has taught me to perceive God at work in the gathered community of believers; and whether we are chanting by candlelight, singing an intricate anthem or preaching up a storm, God is speaking in our voices. As we collaborate on the Oxford Winter Night Shelter, God is working in our hands.

My placement church was founded in 1780, so that dissenters who baptised infants and those who baptised adults could all worship together in safety, in a ‘Protestant Catholic Church of Christ’. Their reasoning was this: ‘because the Lord Jesus receiving and owning them on both sides of the question, we think we ought to do so too.’ It seems to me that this is a brilliant place to start whenever we encounter a Christian who differs from us in belief and practice — even when we vehemently disagree with them. Christ receives and owns them, and we certainly don’t own Christ: so, we should expect to meet Christ in, and not just in spite of, our diversity.

Lovely in limbs, and lovely in eyes not his

To the Father through the features of men's faces.

What is Ecumenism? What isn’t it?
How my Faith Changed at University: Ecumenism and Diversity
Discovering Ecumenical Services at University