The Church and Social Class: Breaking Down Divisions 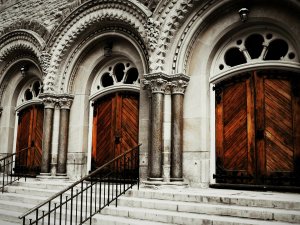 Recently a friend relayed an episode to me in which they offered a difficult answer to a senior church minister. The minister in question, bemoaning the fact that their churches were struggling for membership, was surprised to hear my friend’s response. “Go into your churches and listen to the accents of the other minsters there” they said, “then you’ll find your answer.” My friend explained to me that the area in question was a very working class one, but when they had spent time there, only one minister they met had a local accent.

It would be easy to dismiss this story. Surely this senior minister is working with whatever is at their disposal? If the people going forward for ministry are not originally from that area, what can they do? But of course this story, and such a dismissal only reinforce the problem. The statistics bear it out. A recent YouGov poll found that 62% of churchgoers are middle class, and just 38% working class. However we view class, the fact is that those from poorer backgrounds are coming to church less.

The dominant culture of our society is middle class. Why? Because middle class people can afford to be the shapers of culture and therefore of society. Think of how many musicians, actors, businessmen and women, and politicians come from middle class backgrounds. Why is this? It’s a question of the ‘haves’ and ‘have nots’. All good parents want the best for their children, but whereas with the haves that may mean music lessons, private tuition, or a beautiful house near a good school, for the have nots it means three meals a day, shoes that fit, and a roof that doesn’t leak.

The second scenario is for a lucky working class child. I have friends and close family members who go without regular meals to feed their children. I personally benefitted from parents that would willingly and regularly do this as I grew up.

This is not controversial stuff, though it should be. Indeed, even the Church of England’s House of Bishops recognises the fact that growing inequality and child poverty is a direct result of immoral political decisions. The church must do more to speak into this situation, to call it out for what it is, not play into it further. It’s true that the church does commendable work fighting poverty and inequality. I love it for that. From the Trussell Trust, the UK’s single biggest provider of food banks, to Christians Against Poverty (CAP), who do brilliant work helping people learn to better manage their finances. The will is clearly there. So why so few working class worshippers on a Sunday morning?

The key, I think, is culture. When a working class person walks into a church, what do they feel? When they speak to the people in the church, do those people reflect a reality they recognise?

A few years ago, I was listening to a radio interview with an academic, who was sharing some of the findings from her research into class and opportunity. She explained that it’s not simply that working class people are afforded fewer opportunities, but that the practice of ‘networking’ is out of the question for them. The working class culture of work is that any opportunity you may be lucky enough to get will come your way because your hard work has been noticed. To go begging for it is to gain an opportunity without having to work for it first, and that is fundamentally dishonest.

So what can the church take from this? Working class communities often have a strong sense of morality and pride. Certainly my working class roots, rightly or wrongly, are a source of great pride for me. My family has what it has because it’s made difficult sacrifices whilst working hard for those things, particularly my parents. A part of that pride is the sense that ‘we are not a charity case’. Practically, this can mean that if a working class person is not invited to be a part of something, rarely will they feel that they have the right to be.

Tragically, this means there is an awful lot of talent going to waste. If we are to raise and nurture people effective in various church ministries, we must actively offer opportunities to people who could have, or could develop, talents in that area. I was lucky enough to belong to churches at various times that had people who did that for me.

On the other hand, we must never, ever assume that a person knows they can be a part of something: knows they can join the prayer team, knows they can be on the PCC, knows they can offer to preach, to lead, to serve. Believe me when I say that this feels like rejection, and it is a rejection that is often suffered in silence. Know that when you ask a person to take an active role in ministry, you are not doing them a favour. They are not there to receive a condescending pat on the head for trying ‘in spite of it all’. They are, as you are, equal partners in the body of Christ, and they are, as you are, there to work to build the kingdom of heaven on Earth.

Written by Adam Spiers, SCM member and recent theology graduate from the University of Exeter. He is now studying a Masters in Christian Theology (Anglican Studies) at the University of Durham. This post is adapted from the full version, which you can read on Adam's blog. Follow Adam on Twitter, @adamjspiers.

Tags:
Churches
< Back to all blogs