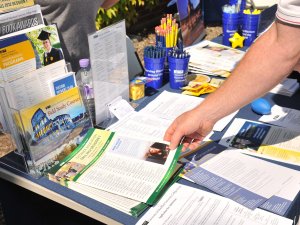 Today I identify as a pacifist, but that was not always the case. In fact, only a few years ago that couldn't have been further from the case. I grew up in a military family, and my Grandad received an award for bravery which led him to being one of the men to carry Winston Churchill’s coffin. I have memories of bringing a book for show and tell at primary school to brag of my Grandad’s efforts! My dad joined the army when he was 16 straight from school and, by the time I was born, he had been on tours of Northern Ireland. I vividly remember spending several summer weekends going to regimental family days with my parents where I could climb onto military vehicles and sit in the commander’s seat, crawl around under cargo nets and jump around on big bouncy castles with my friends.

At the time, I saw this all as fun. Soon enough, I was getting my own set of camouflage clothes and running around playing war with my friends. As I got older, the days of running around playing war faded out, but the small seeds that have been planted about the military being fun, brave and adventurous begin to slowly grow. I had decided I was going to join the army by the age of 14, and from that moment onwards education was just a thing standing in between me and being a soldier. I was what I would call now an ‘ideological recruit’. As a spokesperson from Child Soldiers International says: “Adolescent boys with few economic and social opportunities are seen as easy recruits by the MoD and are actively targeted by its advertising campaigns.”

But the military isn't just made up of young men and women with few life options or childhood-nurtured fantasies of a heroic war. It also houses graduates from the middle and upper class (who generally go straight into the officer class and therefore give orders to the working-class recruits, which is problematic in itself). It is also important to say that the military is not the only part of the war system. In order for there to be war, there needs to also be an arms trade and a government working together, and for this to go on generally unquestioned there also needs to be support and complicity from public institutions, the media, education and in the culture.

The military’s main university presence is the Officer Training Corps (OTC). This is a strange mix of university society and training reserve unit. They want your commitment and if you give them that, you can gain training and skills, adventure training and sports, and a great social life. The reality is written on their own website: “The UOTC has two key roles. Firstly, to provide a positive military experience to those Officer Cadets who ultimately go on to civilian employment, so that they are minded to act as positive advocates for the army and secondly, to aid in and facilitate the recruiting of regular and reserve officers.”

The UOTC is the young adults’ version of my family fun days. It is a clever way of planting seeds. Like any bitter pill, it is easier taken with a spoonful of sugar- the military ethos is easierto believe in when you are bombarded with fun trips. The UOTC is geared towards the future ‘professional’ and heads of industry and is presented as something good to have on your CV. It markets itself as presenting university students with a unique opportunity to develop themselves as leaders. And the aim of the OTC is to have these future leaders of public institutions, media, culture and education to be “minded to act as positive advocates for the army”. There are two levels of recruitment going on here: recruiting people physically to the army and recruiting people’s minds to the wider cause of promoting the army!

Most concerning, though, are the arms traders present in universities, who market themselves towards the future top engineers, business minds, project managers, leaders and financial experts. Stumbling across a website of one of these companies you may be forgiven for at first not seeing what they are really involved in. There is never any mention of the atrocities they are involved in, and their logos wouldn't look out of place alongside any other legitimate high-end business consultancy. The arms trade basically uses a concept called compartmentalisation. This means splitting a huge task in to lots of subtasks. It is easier to convince people to be complicit in the arms trade if they are only the person who designed an electronic chip. But that chip is then passed on to the person who places that into a circuit board, and eventually a weapon is formed and used by another country (sometimes on civilians and children- see the case of UK arms sales to Saudi Arabia). The point is that each person in that chain is able to relieve themselves from overall responsibility from what that weapon was eventually used for. Another clever thing arms companies do is advertise themselves as a kind of “defence solution”. The word attack is never used and who they sell their “products and training” to isn't really mentioned, and yet in reality their weapons are often used for attacks and illegal wars.

What can we do?

The war system, state any any controlling structure, maintains control over the public by using many techniques. In short, we could perhaps boil these down to three: wealth, power (force) and status (public opinion). We could campaign for the rest of our lives to raise money and buy out stalls at freshers’ fairs all over the country, but we would never have more money than companies worth billions. When it comes to wealth they have the upper hand. We could try and force them out, but they would always have superior and more professionally-trained forces.

In my opinion, the only avenue we have as pacifist activists is status/public opinion. We must spend our energy undermining the slick advertising by showing up the reality of war. We must show what the military and arms companies are really doing. We must educate but not preach. Eventually, we can sway public opinion. And when the public opinion is swayed, the State must bend to it. If you have ideas or experiences that you think could help us achieve the last of combatting militarism in universities, I would love to hear and discuss them. Send an email to wayne@ppu.org.uk.

Wayne is an ex-soldier who now works in peace and anti-militarism education for the Peace Pledge Union.

Tags:
Education
University
Peace
< Back to all blogs