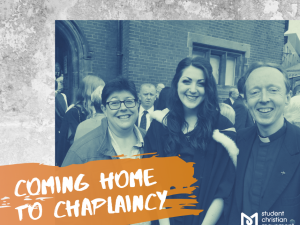 In 2012, after years of working hard to get the grades I needed to get a place at university and move away from my hometown, I found myself as an undergrad at Newcastle University - the furthest away I could get whilst still being in England.

I had been working shifts while retaking A-Level exams, which often meant I was working on a Sunday and unable to attend Mass in my home parish. I would list myself as ‘Christian’ on applications, but I was becoming increasingly reluctant to write ‘Roman Catholic’ - something I had been so proud of for so many years.

Some older friends from Student Cross, the walking pilgrimage I have been part of since I was a child, gushed about how fantastic the chaplaincy was at Newcastle when I said where I was headed for university. “You must go to Bede House! It’s where some of my best memories of uni were made!” This stuck in the back of my mind, and when Sunday rolled round at the end of Freshers week, I figured I had nothing to lose by giving it a go. I looked up where the chaplaincy was and tentatively headed to mass.

I was welcomed in like I had just returned home. One of the chaplains, Mia, was so keen to learn my name and where I was from and encouraged me to come to the next chaplaincy event. I went - but I felt like a fraud; I hadn’t considered myself a Catholic in so long I felt like I didn’t belong. That, and the shock on my flatmates faces when I said where I was going. “You? A Catholic?” they said in disbelief, “but you like to have fun and go out and have a drink!”

It took me a good few months to return to mass at the chaplaincy. I was late - I was scared of returning after such a long gap. The services used to take place downstairs - the chaplain gave me a grin as I came downstairs and found a space, and straight after mass Mia rushed over - “Alice! Great to see you back! How are you doing? Come into the bar, tell me about what you’ve been up to.”

And with that - I knew I was home. Bede House became my haven in the chaos that is university.

The chaplaincy both saved my faith and my sanity. It helped refresh my Christian belief and helped me realise how relevant and important to me it was. During this time I went through some really difficult times in my personal life, but Mia was always there for a chat, whether over a G&T in the bar or after Rosary group (if someone had told me that whilst at uni I would look forward to Rosary group every week I would have told them they were very mistaken!) Not only that, but some of the people I met at the chaplaincy have become friends for life. We have stayed in touch after graduation despite being spread all over the world, and I have to credit Bede House for creating the most amazing community.

One of the things I miss the most is how relevant the chaplaincy was for young people. It has been difficult after graduating to find a parish where I don’t feel alienated as the only young person, and where the priest tries to explain the readings in a clear way for the congregation to understand. I consider myself so blessed that I’ve managed to find it now, but it’s taken a good few years of searching.

My only regret from university is that I didn’t find the chaplaincy earlier. It really is where some of my best memories of uni were made, and I can’t encourage students enough to go and find their chaplaincy while they have the chance.

Written by Alice Brien. Alice graduated in 2015 from Newcastle University in Combined Honours in English Literature and History. She is now a freelance musician, and was the National Director of Student Cross in 2019.