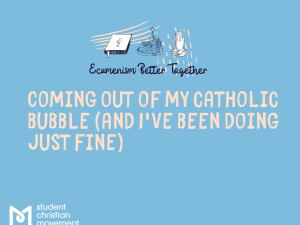 I really enjoyed my Roman Catholic school education but, like everything, 14 years within such a system had its positives and negatives. I have fond memories of singing great hymns at primary school (‘Shine Jesus Shine’ is a particular banger) and my very inspirational secondary school headteacher, Sr Brenda. Less pleasant was having to retrieve stray tennis balls from the graveyard adjacent to our sports pitches (the perils of convent secondary school life).

RE lessons at my secondary school were bonkers, to say the least. Sr Brenda was laidback and relaxed about the fact that my school was almost certainly 95% atheist; yet some of our RE teachers (ironically, the ones who had started out as nuns or sisters, but left religious life to marry) were militant Roman Catholics who set out to brainwash us all. Being savvy students, said brainwashing didn’t work; that said, it didn’t make the experience acceptable. I cannot recall any references to or teaching about other Christian denominations in Years 7-9. For my GCSE RE, we were grudgingly taught a tiny bit about a few other denominations, but in a disparaging way.

Up until university, almost all of my friends had a Roman Catholic background, even if they were not practising. I had one Jewish friend from an orchestra, and one Muslim and one Sikh friend from Sixth Form – but that was it. It was a big culture shock, then, to go from such Catholic circles to an Oxford college with firm Anglican foundations and a female married priest/chaplain, who had two children. I of course knew that female priests existed in Anglicanism (only thanks to The Vicar of Dibley, mind you), yet I’d never come across one in ‘real life’. I was curious, sceptical and intrigued about what the differences might be – if any. I had never given much thought to why Roman Catholicism does not permit women priests, or if they should, before encountering Rev. Emma; yet her very presence could not be ignored. It forced me to reflect deeply about the role of women in Roman Catholicism.

My social circle at Oxford was predominantly either Atheist or Protestant. Both my sisters are non-believers, so it was actually the faith of my Protestant friends that I found more challenging to navigate. I was suddenly encountering people who didn’t believe in praying to saints or to the Virgin Mary (one person was afraid to even talk about Her, let alone to Her), or having statues and holy water all over the place – and I could not articulate why I did things differently to them, because I had not really thought about it. I had taken aspects of my faith, my personal prayer life, and Catholic dogma for granted, assuming everyone would understand the basis for them - even if they didn’t necessarily agree or do the same. Yet that was not the case…

Perhaps the greatest learning curve has been being best friends at postgrad level with a Quaker: a denomination I had been entirely ignorant of, save for knowing that they were willing to perform same-sex marriages. Realising that there are denominations which have no clergy and no sacraments has been mind-boggling for me! I had not realised it at the time but before Oxford I had been living in an all-too-comfortable Catholic bubble: it never occurred to me that some Christians have no hierarchy or the Eucharist. This has provided much food for thought.

Ultimately, although having friends of different traditions reinforced just how Roman Catholic I am, I believe that having such friends and encountering female, married priests with children, has enriched my understanding and appreciation of ecumenism. The fact that we have such a diverse and catholic (small c) Church is a blessing and has strengthened and deepened my relationship with God, as well as those here on Earth. I have learnt to be more open-minded and understanding as a result of ecumenical friendships, and I would not have it any other way.

Written by SCM Member Shanika Ranasinghe. Shanika is a cradle (from birth) Roman Catholic student, studying for a part-time PhD in the sociology of music at Royal Holloway, University of London.

How my Faith Changed at University: Ecumenism and Diversity